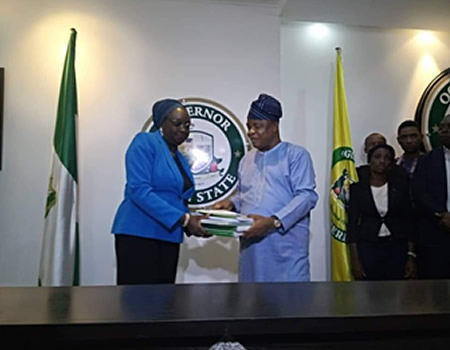 The outgoing government in Ogun State under the leadership of Senator Ibikunle Amosun has handed over reins of power to Prince Dapo Abiodun.

At the brief ceremony held on Tuesday, at the Conference Room of the Governor’s Office, Oke Mosan, Abeokuta, the Secretary to the State Government, Mr Taiwo Adeoluwa, handed over four-volume documents to the deputy governor-elect, Engr (Mrs) Noimot Salako-Oyedele.

The ceremony was attended by top government functionaries and members of the Joint Transition Committee.

Adeoluwa said the documents contained the activities of the outgoing government for eight years which included audited account till December 2018; Handing Over Note; Home Owners Charter and financial statements and records.

Responding, Salako-Oyedele, commended the outgoing government for the success recorded in the last eight years, submitting that all the documents would be subjected to interim review.

“We have collected the documents and the documents will be subjected to interim review. Our people deserve good governance and that’s our pledge to them. We congratulate the government for the successful completion of tenure,” she added.

Earlier, Amosun accompanied with his wife, Olufunso, was pulled out from the Governor’s Office in a motorcade amidst cheering from well-wishers.

The outgoing governor expressed joy for the completion of his two-term of eight years in office, insisting that he is leaving the state better than he met it.

Amosun said: “Firstly, all glory and adoration to almighty God because it is God that does things. He just uses us as tools in the way he wishes. So, I want to thank God primarily and the good people of Ogun State.

“My joy knows no bound because I am not the first governor of Ogun State and you people know Ogun State more than I do because we are like soldiers and they will say, ‘soldier comes, soldiers go, barrack remains’.

“Clearly you (journalists) have seen even the military administrations amongst others.

“We came, we saw and to a reasonable extent and we have conquered.

“We are leaving Ogun State better than we met it. Some can not even stay and someone says I am running away yes, but I will be running to Mecca to say thank you to God and I will be away for like 14 days because I will be coming for Sallah.

“I have told God that if he could do this for me, I will come and say thank you. And I am going to thank him (God) for what I will describe as unseen fingers, uncommon glory and favour.

“History will write that I came and this is how I left it.

“Immediately we came we knew what we wanted to do and those certain things must be put in place such as infrastructure and we did that.

“I have done my bit and I have moved on and of course I have a new assignment which I will do more better than I have done in government.

“I am off and once you have done your bit, leave so that people can decide what is best for them. We have done our best and I am at peace with my creator.”