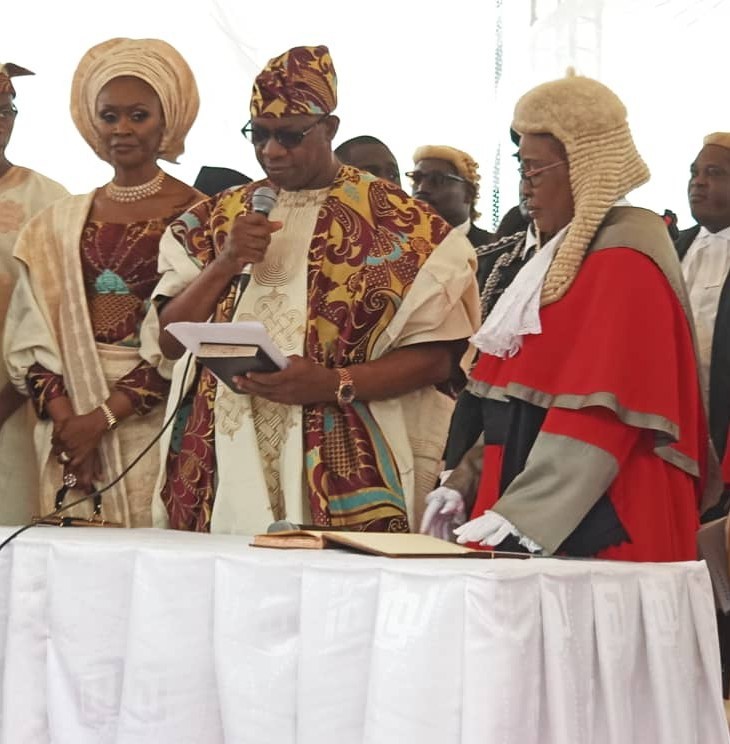 Prince Dapo Abiodun was on Wednesday sworn in as the fifth Executive Governor of Ogun at the MKO Abiola International Stadium in Abeokuta.

Abiodun who turned 59 on Wednesday, was sworn in after his deputy, Mr. Noimot Salako-Oyedele was sworn in earlier by the Chief Judge of Ogun, Justice Mosunmola Dipeolu.

In his inaugural speech, Abiodun offered himself as a tool to bring the greatest good to the people of Ogun regardless of creed, gender, and political affiliation.

“You will always find in me conduct of Omoluwabi (hood character) expected of a teacher’s child who I am.

“I will govern with character, make your interests the core of governance, serve you diligently.

“I will neither personalise nor abuse your mandate and I will not betray your trust,” he said.

He pledged that his government would provide good and accountable governance through the provision of quality leadership to all.

The governor stated that the economic committee he had put in place had hit the ground running and its recommendations would begin to manifest in days, months and years to come to positively impact on the people.

Abiodun explained that he would in the next few days set up an Asset and Projects Assessment Committee to assess all ongoing projects and advise on their potential benefits to the people and priority to be attached to them.

The governor pledged that his administration would empower the local governments’ areas to enable them effectively and efficiently discharge their constitutional guaranteed mandate.

Abiodun explained that his administration would engender various reforms in the state public service.

He noted that “the Building of our Future Together’ agenda could not be realised without the support of the civil servants.

The governor stressed the importance of transparency and accountability for the elimination of leakages which would enhance judicious use of the commonwealth.

He said he would immediately commence full implementation of the Treasury Single Account (TSA) and full automation of Ogun finance functions and regular publication of audited accounts among others.

Abiodun explained that he had directed his deputy to coordinate the coalition of the township and rural roads across the state.

He said there were immediate plans to engage communities in council areas to jointly determine two or three roads in each that were of immediate and utmost priority for intervention.

Abiodun promised to restore the glory of the state education system “through an urgent, comprehensive and disruptive approach akin to the declaration of a state of emergency.”

The governor said his administration would soon organise an Ogun Education Summit to enable stakeholders to examine the causes of a decline in the sector and proffer solutions.