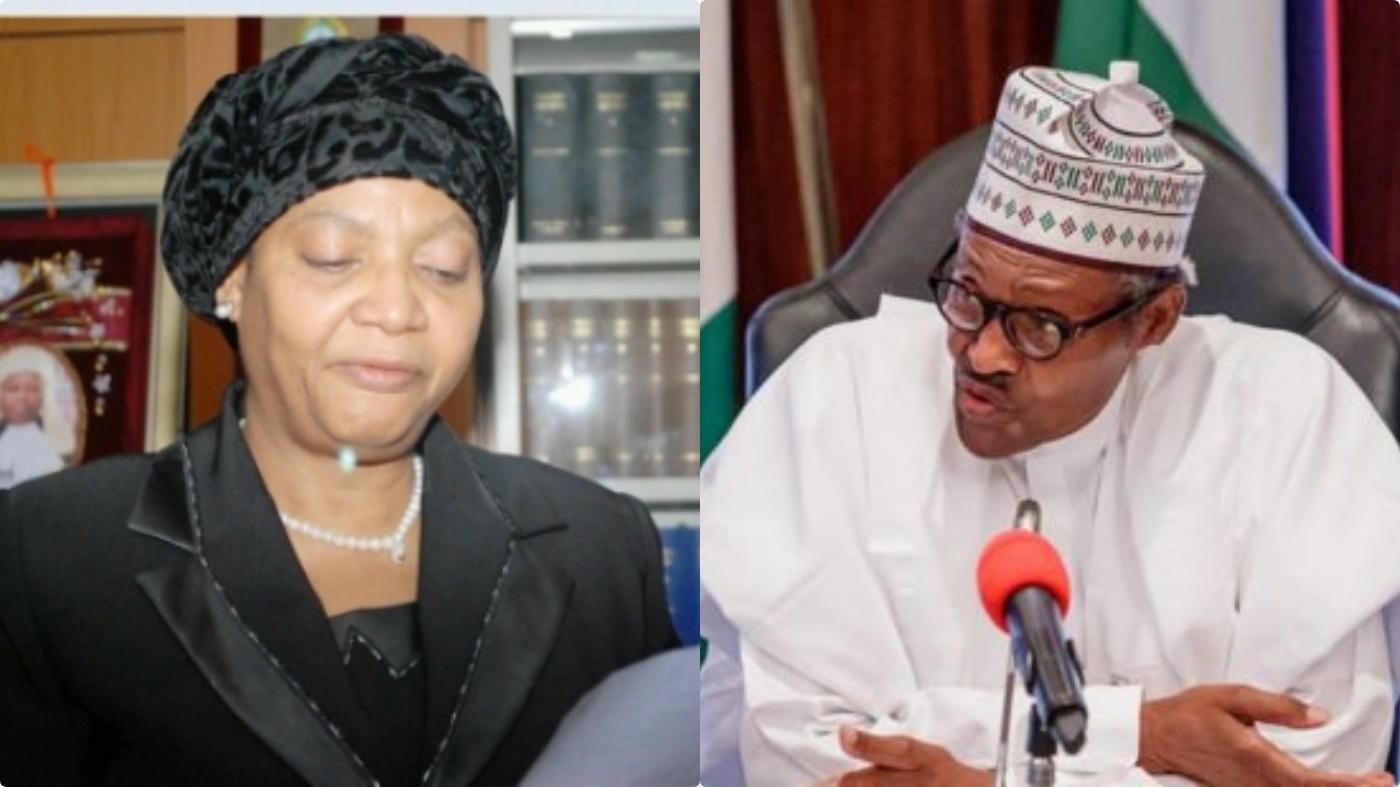 President Muhammadu Buhari has told the Presidential Election Petition Tribunal sitting that he was not aware that Aliyu Haidar Abubakar, the biological son of Justice Zainab Bulkachuwa, campaigned for him during the electioneering period.

President Buhari said he only got to know that Abubakar was his supporter after he read a copy of the motion the Peoples Democratic Party (PDP) and its presidential candidate, Atiku Abubakar.

This online news platform recalls that the PDP and the former Vice President had filed the motion to disqualify Justice Bulkachuwa from presiding over the five-man panel tribunal that is hearing petitions challenging the declaration that he won the February 23 presidential election.

The President, who is the 2nd Respondent in Abubakar and PDP’s petition marked CA/PEPT/02/19, claimed that his attention was further drawn to exhibits that contained newspaper cuttings, indicating that Justice Bulkachuwa’s son canvassed for votes in his favour.

President Buhari in his 11-paragraphs written address he filed to support affidavit he lodged to counter Abubakar’s motion, insisted that the petitioners failed to prove that Justice Bulkachuwa had in any way exhibited any form of bias against them since the petition was entered before the tribunal.

The President’s affidavit was deposed to by one Kolawole Andrew Aro, a litigation officer in the chambers of President Buhari’s lead counsel, Chief Wole Olanipekun (SAN).

President Buhari told the Tribunal that he had since his emergence to power refrained from dabbling into the membership of any judicial panel.

He said he never interfered with the constitution of any tribunal, “whether the panel is adjudicating on election petitions relating to the office of President, Governor, National or State Assembly, or sitting in any civil or criminal matter howsoever.”

Buhari, , who was represented at the tribunal on Wednesday by a team of lawyers led by seven Senior Advocates of Nigeria (SANs), maintained that the former Vice President and the PDP, had no reason whatsoever to be apprehensive about the involvement of the Court of Appeal President in the adjudication of their dispute with regards to the outcome of the 2019 presidential election.

His words: “Having said that, and bearing in mind the sole issue distilled for determination by the respondent supra, it is the Respondent’s humble submission that whether or not the honourable President of the Court of Appeal should rescue herself from further sitting or participating in the proceedings in this petition and be replaced by another justice of this honourable court to sit in his place to hear and determine petition, as prayed by the petitioners, is within the prerogative and discretion of the honourable President of the Court of Appeal.

“What is to be taken into consideration in coming to one decision or the other in respect of the application is also within the exclusive discretion of the honourable President.

“This is not a decision that can be dictated to her by either the petitioners or respondent or any of their counsel.

“When it comes to matter of discretion, the judge or justice involved is the sole determinant.

“The honourable President of the Court of Appeal had not displayed any bias in favour of any of the parties, particularly the Respondent.

“For the respondent, it has no reason whatsoever to complain about any of the justices sitting on the panel or any Justices of Court of Appeal for that matter.

“It is not the constitutional responsibility of the Respondent to appoint or nominate Justices of the Court of Appeal sitting or adjudicating on a presidential election petition.

“We submit that the Respondent has no say, in whatsoever manner, in the appointment of Justices who are adjudicating on the present presidential election petition.

READ  PHOTOS & VIDEO: We say no to terrorism in Nigeria — Adeboye protest

“As the Chief Executive of Nigeria, the Respondent respects the doctrine of separation of powers and does not dabble into the membership of any judicial panel, whether the panel is adjudicating on election petitions relating to the office of President, Governor, National or State Assembly, or sitting in any civil or criminal matter howsoever.

“The Respondent was not at any time privy to the said exhibits, he only became aware of them on being served with the Petitioners’ present application.

“May we submit that from the totality of the Petitioners’ processes, we notice that the Petitioners do not deny the truism as provided by the constitution, regarding the prerogative of the President of the Court of Appeal, to constitute this panel.

“In other words, it is still within the constitutional prerogative of the same President to either decided whether to recuse herself and if he does, to nominate or appoint a replacement or to leave the panel of four, having regard to the clear provision of section 239(1) (a) of the Constitution”, President Buhari added.

The Independent National Electoral Commission (INEC), which is the 1st Respondent in the matter, on its part, through its team of lawyers comprising five SANs led by Mr. Yunuz Uztaz, urged the tribunal to dismiss Atiku and PDP’s motion, contending that it was in breach of section 42 of the 1999 Constitution, as amended. INEC argued that the motion was discriminatory in the sense that it sought to disqualify Justice Bulkachuwa on the basis that she was married to a politician.

INEC maintained that granting the instant application would set ”a very dangerous precedent,” noting that many male judicial officers are equally married to politicians.

“My lord we vehemently oppose the application. And we have filed a five-paragraphed affidavit to show that exhibit 2 to 4 that was attached by the petitioners, is of no moment.

In the vein, the All Progressives Congress (APC), Nigeria’s ruling party, through its team of nine SANs, led by Prince Lateef Fagbemi, accused the PDP and its Presidential candidate of engaging in “cheap blackmail”.

The APC, while adopting its 15-paragraphed affidavit, said it was appalling that PDP was in the habit of engaging in “unpardonable and regrettable attacks” on Judges, saying it did so during a governorship election petition case that involved Osun State.

“This application is nothing but cheap blackmail. On facts and law, the application is most unmeritorious”, Fagbemi argued. Nevertheless, noting that Justice Bulkachuwa will retire by next year, Fagbemi, while concluding his argument, said, “My lord, we urge you to lead the matter”.

Meanwhile, relying on point of law, Dr Uzuokwu SAN, counsel to the petitioners, argued that none of the Respondents disputed the allegation that Justice Bulkachuwa was connected to key members of the APC which is the 3rd Respondent in the matter.

Justice Bulkachuwa recused herself from the tribunal shortly after Buhari’s claims.