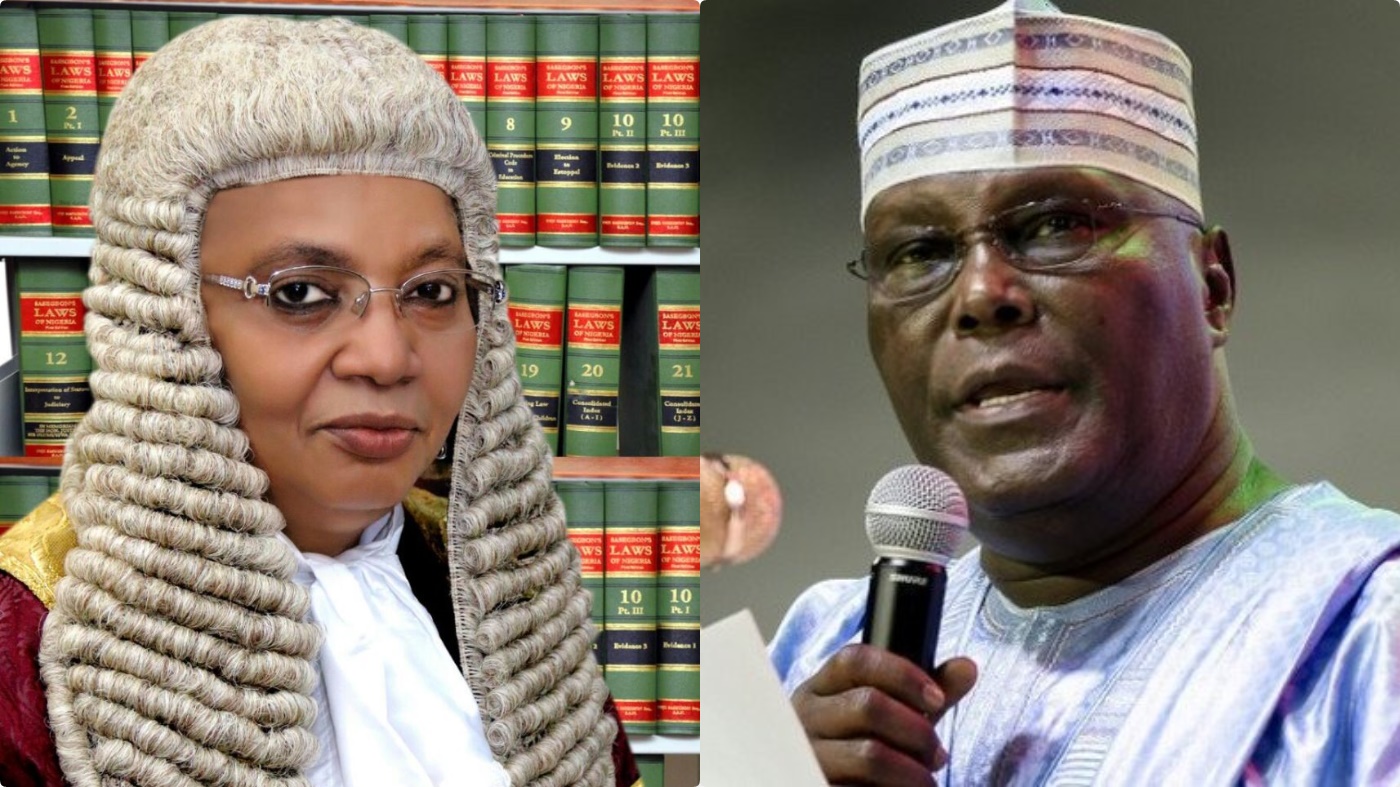 The 2019 presidential candidate of the Peoples Democratic Party (PDP), Nigeria’s main opposition party, Atiku Abubakar, has praised Justice Zainab Bulkachuwa, the chairman of the five-man panel of the Presidential Election Petition Tribunal, for recusing herself from the tribunal.

Justice Bulkachuwa recused herself from the Presidential Election Petition Tribunal on Wednesday, May 22.

This online news platform recalls that on seeing Justice Bulkachuwa as the chairman of the five-man panel of the Presidential Election Petition Tribunal, Abubakar and his party raised the alarm over her “connection” with the ruling APC.

At the resumption of the Election Petition Tribunal sitting May 15, the tribunal asked the PDP and its candidate to formally file an application asking Justice Bulkachuwa to withdraw, which the party did on May 16.

At the resumption of sitting on Wednesday, the tribunal dismissed the application by the Peoples Democratic Party (PDP), Nigeria’s main opposition party and its presidential candidate seeking to disqualify Justice Bulkachuwa from presiding over the five-man panel tribunal that is hearing petitions challenging the declaration that President Muhammadu Buhari won the February 23 presidential election.

The five-man panel in a unanimous ruling held that the said motion lacked any merit to warrant the tribunal to grant it.

However, Justice Bulkachuwa personally decided to recuse herself on the ground that the law has been properly stated.

Giving reasons for her decision, the judge said: ”I have allowed the ruling on the application urging me to rescue my membership of the tribunal to test the position of the law.

“Now that the application has been dismissed on account of incompetence, I hereby announce my withdrawal from the panel.

“The remaining four members of the panel would remain while step would be taken to appoint my replacement’’, she said.

Reacting to Justice Bulkachuwa’s withdrawal in a statement personally signed by him and sent to Naija News, Abubakar said Justice Bulkachuwa’s “action showed courage and is an act of patriotism. She has, by this action, increased the confidence the public have for the judiciary.”

The statement reads in full: “One of the principal maxims of the Common Law is nemo judex in causa sua (no man shall be a judge in his own case). The call by my legal team for Justice Zainab Bulkachuwa to recuse herself from the Presidential Election Petition Tribunal was predicated on this principle, being that her husband, Alhaji Mohammed Bulkachuwa, is an All Progressives Congress Senator-elect and the case she was expected to adjudicate upon had a bearing on that party.

“My legal team’s objection was not a reflection on Justice Bulkachuwa’s character or competence. As a matter of fact, I have great respect for her, being a pioneer and advocate for gender equality and female empowerment.

“It is with this in mind that I commend Justice Bulkachuwa for recusing herself from the Presidential Election Petition Tribunal Panel hearing my petition against the Independent National Electoral Commission and the Presidential candidate of the All Progressives Congress, President Muhammadu Buhari.

“Her action showed courage and is an act of patriotism. She has, by this action, increased the confidence the public have for the judiciary.

“Not only do I commend her, but I also pray, especially in this holy month of Ramadan, that Justice will be done by the tribunal according to the fear of God and not in keeping with respect for the powers that be.