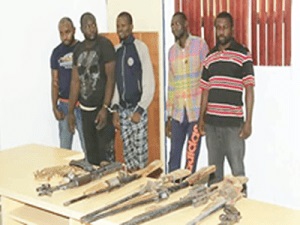 Notorious kidnappers have met their match after they were caught by security operatives in Nasarawa.

The Police Command in Nasarawa State says it has arrested 14 suspected kidnappers terrorising parts of the state.

The state Commissioner of Police, Bola Longe, stated this while parading the suspects at the command’s headquarters on Monday in Lafia.

Longe explained that the suspects were arrested during a raid on their hideout at Mararaban-Udege, Toto Local Government Area of the state at the weekend.

According to him, some of the victims from the area had identified some of the suspects during their abduction.

The commissioner said an investigation was on to ascertain their level of involvement and other accomplices.

He said the police was battle ready and committed to rid the state of all criminal elements, especially kidnappers and armed robbers.

Longe warned those with criminal tendencies to desist from the act or be ready to face the wrath of the law as the police would be coming for them.

The commissioner assured law-abiding citizens of the state of their safety as they go about their lawful businesses.

“We need the cooperation of the public in terms of vital information in order to ensure effective policing,” he said.