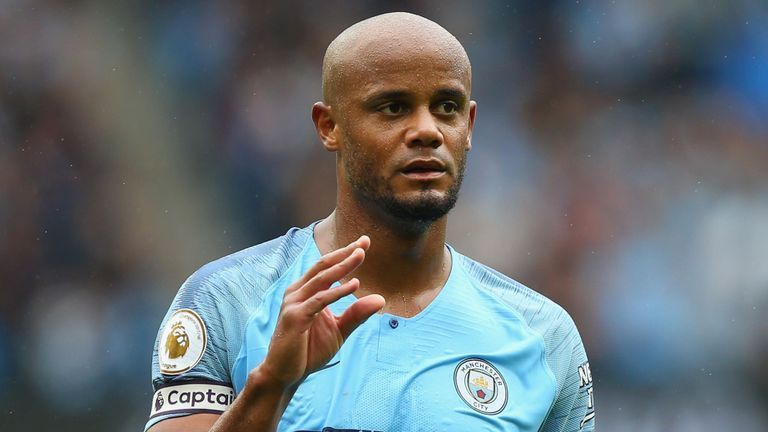 Vincent Kompany announced Sunday that he will leave Manchester City after 11 trophy-laden years to become player-manager of Anderlecht.

The 33-year-old signed off with victory in the FA Cup final on Saturday, where the club captain lifted the trophy after City thrashed Watford 6-0 to complete a domestic treble.

“As overwhelming as it is, the time has come for me to go. And what a season to bow out,” Kompany said.

“I feel nothing but gratefulness. I am grateful to all those who supported me on a special journey, at a very special club.”

Anderlecht is the Belgian club where Kompany began his professional career before joining Hamburg and he admitted he is relishing the chance to move into management.

“I choose to be grateful for the past but remain ambitious and driven for the future. For the next three years, I will take up the role of player-manager of Anderlecht. Belgium’s finest,” he wrote on Facebook.

“This may come as a surprise to you. It’s the most passionate yet rational decision I’ve ever made.”

Kompany was in tears after scoring a dramatic long-range winner in City’s final home game of the season against Leicester on May 6, a result that moved them to the brink of the Premier League title.

Speaking at the time, he hinted his emotional response might have been triggered by a potential departure.

But he waited until the season was over before finally confirming the end of his glorious spell at City.

“I will never forget how all Man City supporters remained loyal to me in good times and especially bad times. Against the odds you have always backed me and inspired me to never give up,” Kompany said.

“(Club owner) Sheikh Mansour changed my life and that of all the City fans around the world, for that I am forever grateful. A blue nation has arisen and challenged the established order of things, I find that awesome.”

Kompany has been ravaged by injuries in recent years and he featured in only 17 of City’s 38 league games this season because of muscle problems.

However, he will be remembered for his influence on and off the pitch, a contribution that established him as the heartbeat of City’s greatest era.

He led City to a first top-flight title since 1968 in 2012 and goes down as one of the most iconic players in the club’s history.

Along with Sergio Aguero and David Silva, Kompany is one of only three survivors from the 2012 title triumph.

“It’s cliche to say it but it’s also so true: without my team-mates, I would have never been here today,” he said.

“We fought many battles together. Side by side. In good times and in bad. So to all of you, from the 2008-2009 squad to today’s domestic treble winners: I owe you guys!

“A special word also to Pep and the backroom staff: you’ve been superb. You’ve followed me through so much hardship. You made me come back stronger every time. Thank you so much.”

In September, City will hold Kompany’s testimonial match, from which he will donate all profits to Manchester’s homeless.

City chairman Khaldoon al-Mubarak told the club’s official website: “There have been many important contributors to Manchester City’s renaissance, but arguably none are more important than Vincent Kompany.

“He defines the essence of the club. For a decade he has been the lifeblood, the soul, and beating heart of a supremely talented squad.

“A booming voice in the dressing room yet a quiet and measured ambassador off it, Vincent can be as proud of himself as we are of him.”

City midfielder Kevin De Bruyne, Kompany’s club, and country team-mate, tweeted: “Playing for about 10 years with this man for club and country. And what a privilege it’s been.

“Big player, Big personality and big leader. Learned a lot from you. Wishing you all the best for the future.”