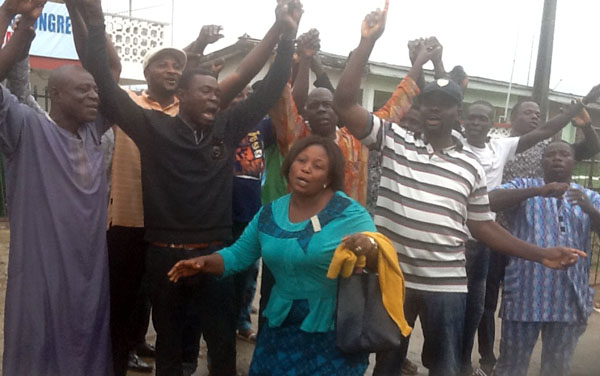 Primary and secondary school teachers whose appointments were on Wednesday declared null and void by the Ekiti State Government staged a peaceful protest in Ado Ekiti on Friday, appealing to Governor Kayode Fayemi to reabsorb them.

The 568 teachers were among the 2000 workers, who were appointed by the immediate past governor, Mr Ayodele Fayose, few days to his exit from office in October last year.

The Dr Kayode Fayemi administration had following a report of a committee set up to review irregular employment in the state, said on Wednesday that “the appointments were found to have violated due process, thus cancelled and declared null and void”.

The protesting teachers, who stormed the Teaching Service Commission as early as 8:30 a.m., flaunted their letters of appointment as evidence of legitimacy and valid employment.

One of the teachers, Mr Ganiyu Olawole, said their appointments followed due process beginning with an advertisement, obtaining N1,000 employment forms, written and oral examinations/interviews and appointment in line with the civil service rule.

Olawole, who said they had not been paid a dime since they resumed for duties eight months ago, added, “Government must be passionate. Most of us have relocated to our schools and work hard. Some of us even resigned from our previous places of work to take up these appointments”.

Another affected teacher, Mr Adekunle Akande, said “We have to clarify that we were not sponsored by politicians. We have no godfathers and government should be a continuum. Why are we being treated this way? It was shocking that they said we didn’t pass through due process”.

Akande appealed to people of goodwill to intervene, saying, “We should not be sacrificed on the altar of politics, we don’t carry party cards”.

The organized labour in Ekiti State led by the Nigeria Labour Congress Chairman, Joshua Kolapo and Trade Union Congress Chairman, Sola Adigun on Friday appealed to the state government to rescind the decision and reabsorb the workers.

But the Chief Press Secretary to the Governor, Yinka Oyebode, said no worker was sacked as the affected people were not properly employed in the first place.

Oyebode in a statement on Friday said, “The recruitments were obviously mischievous because they neither followed due process nor were ever completed. The affected persons were not duly captured in the Civil Service Structure.

“Apart from letters of employment, they do not exist in the State Civil Service Nominal Roll. They were never captured in the state biometric payment system and never received any salary since the purported ‘appointments’,” he stated.