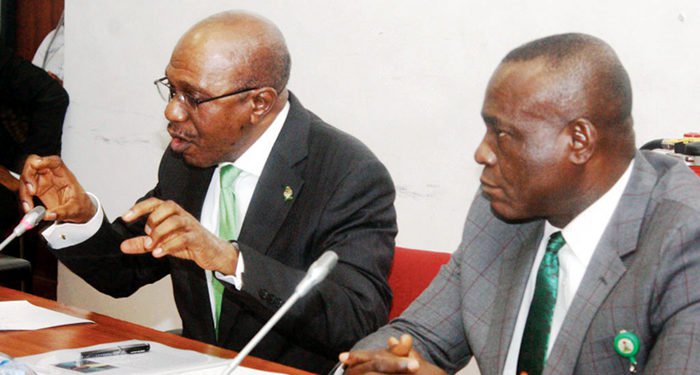 Saboteurs of economic policies will find their match in the Central Bank of Nigeria (CBN), should Governor Godwin Emefiele get the Senate’s all-clear for a fresh tenure.

He said yesterday that circumventing the policies designed by the Federal Government to stabilise the economy had been the bane of Nigeria’s development.

Emefiele spoke when he appeared before the Senate Committee on Banking, Insurance and other Financial Institutions for screening as CBN Governor following his reappointment for another five-year term.

He said: “Part of the problem that we have seen in Nigeria is lack of respect for the policies of this country. Nigeria is very good at putting in place policies that are sound and workable, but implementation has always been almost zero.

“And it is arising because we see sabotage activities. We see people when policies are made, where they pick up the pieces of paper about the policy; what they think about is how do we circumvent this policy?

“The Central Bank of Nigeria, if given this mandate, will push very hard to ensure that those who seek to undermine the policies of Nigeria without respecting the laws of this country will be brought to book under any circumstances.

“And that is why I said, ‘please, pray for us’ because the road ahead is still rough.”

Emefiele did not mention the specific policies that may have attracted saboteurs. But the prohibition of 21 items from accessing foreign exchange has been controversial. The CBN insists that the list will be expanded to strenghten the naira and some local industries.

There are also those who think the easy access to forex at banks has killed their profiteering at the parallel market.

The CBN boss said the era of relying on crude oil as the mainstay of the nation’s economy was gone for good as some other commodities have overtaken petroleum in value at the international market.

“But, unfortunately, we did and that is what we are paying for today. So that when there are some external shocks in the crude oil market, we sneeze, but we only smile when the market is good.

“We will grow that market back again. And after that, we will go into cocoa in the South West area to be sure that what we are doing permeates all the nooks and crannies of this country. Because we think we owe Nigerians this.”

Read also: Emefiele to Nigerians: Tough economic times still ahead
Emefiele, who thanked the lawmakers for praying for the CBN to succeed, said: “I thank you for praying for me because we need it. I say this because the road ahead is still rough and very tough.

“But I want to appeal to all Nigerians that a time comes in the history of a country where you have to learn to respect the policies and laws of a country.”

He decried the high level of disregard and disrespect for policies and laws of the country.

The CBN boss noted that there was no doubt that observing policies and laws put in place by the government is a sure way of growing the economy.

Emefiele explained what the apex bank did to lift the country out of recession.

He vowed that those who work to circumvent and flout laws would no longer be spared.

The CBN governor was worried over the country’s rapid population growth rate, warning that steps must be taken to put in place policies that would take care the projected 425 million people in 2050.

Emefiele said: “We just came back from the IMF/World Bank programme in April. And in the World Bank’s/IMF’s World Economic Outlook, Nigeria is positioned as a country whose population will grow and rise to over 425 million people by the year 2050.

“That will present Nigeria as a country with the third largest population in the world after China and India and indeed surpassing the United States of America in population.

“I worry and I do think that we all should worry that a lot of work needs to be done to make sure that we are able to put in place policies that will make life good for this 425 million people, when we are the third largest population in the world.

“So, we from the Central Bank of Nigeria, from the monetary policy side, have come to the realisation that using the instrumentality of the Anchor Borrowers Programme where access to credit is being provided to our masses all over the country, that it will be a way to generate employment and boost economic activity amongst our rural population.

“The results are there to see that as a result of our Anchor Borrowers Programme where we have disbursed over N190 billion to over 1.1 million small holder farmers, cultivating over 1.3 million hectares of land, that we need to do more of this.

“As we do this, we make finance available at low interest rate, we make access to credit easy for our people. And, in doing this, we will be able to create jobs for them and improve the livelihood of our people.

“That is a sole thing that we make. And I am very optimistic that this can be achieved.”

He continued, “I went to one Asian country. I entered the country happy, but I came out of the country sad. Sad because I could see the level of development that this country has achieved over the last 50 years.

“And I cast my mind back and looked at my country Nigeria, that what have we achieved? This is what gives me the push that at my age of 57, I saw this country when it was good.

“I am looking at the country today and I am saying I don’t want to say it is bad, but I want to say that we have a lot of work to do; because the country has no doubt receded somewhat.

“So from our side in the monetary policy, we will do everything possible to ensure that with the mandate that is bestowed on us, we will pull this country forward.

“Aside from the Anchor Borrowers programme, we are also looking at special programmes targeted at wholesale growth of agricultural sector in Nigeria. Aside from rice and other small good crop markets, we have started looking at palm oil. Because we believe that this country has a lot of potentials in palm oil. If you think about what this country was in the 50’s and 60’s, Nigeria, being a country at that time that controlled 40 percent market share in palm oil industry, exporting its palm oil to different parts of the world. But because we found crude oil, we receded and abandoned it.”

“But what you will find is multiple windows and we don’t have any apologies for it.

“So, you will find multiple windows, because the rates at which foreign exchange is traded through all these windows are substantially the same.

“So, there is no multiple exchange rates, but I will admit there is multiple windows and it is for a good reason.”

Emefiele was optimistic that “very soon, you will begin to see smiles on the faces of our youth, especially those with entrepreneurial skills”.

On how the CBN bailed out the country during recession, he said: “When I resumed work in June 2014, I unveiled a five-year vision for the bank and for the country. Achieving microeconomic stability was my main focus. In trying to talk about what we achieved in the last five years, we should take our mind back to the state of the economy.

“In August 2008, about $62 billion was in our foreign reserve. Within the period, we saw an increase in the price of crude oil. Despite this, our reserve plummeted to about $40 billion. By the time I assumed office, the reserve was $32 billion.

“As a result of the pressure on the reserve, import was high. Export was reducing. As a result, exchange rate had to move. Coupled with the increase of fuel price, inflation became high. Between January 2016 and January 2017, the period was bad.

The Senior Special Assistant to the President on National Assembly Affairs, Senator Ita Enang who presented the nominee for screening, praised the Senate’s speedy response to the President’s request for Emefiele’s confirmation.

Enang said, “This confirmation will be seen as one of the fastest requests to be considered by the Senate. The Executive is grateful. I hereby present to you for confirmation, Godwin Emefiele, Governor of the CBN.”

A member of the committee, Senator Fatima Raji-Rasaki, urged Emefiele to ensure that any time there is funds like the bailout funds, the government is properly advised on how to disburse the funds for the benefit of Nigerians.

Senator Hope Uzodinma reminded his colleagues that the screening was for reappointment and not a fresh appointment.

He noted that in the wisdom of Mr. President, the CBN Governor passed his examination, hence his reappointment for a second term.

Senator Shehu Sani (Kaduna Central) advised the CBN boss to consolidate on the growth of cotton and textile, especially in Kaduna and Katsina states.

The touted petitions against the confirmation of Emefiele were not mentioned during the session.

The chairman of the committee, Senator Rafiu Ibrahim, merely talked about a trending audio video.

He noted that the good work Emefiele was doing might have attracted a distraction.

“When you see a good thing some people want to distract it,” he said.

No fewer than 17 senators attended the screening.