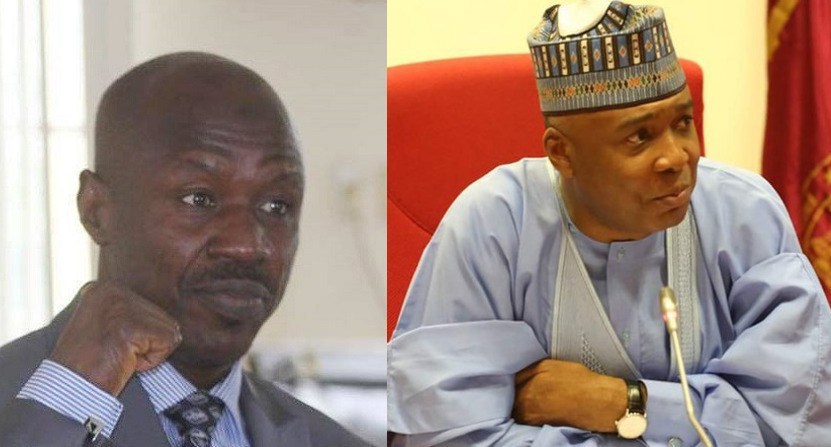 He said the investigation of Saraki was not different from other investigations being done by the anti-graft agency, adding that the agency would not slow down on the war against corruption, which he described as a national disaster.

Magu made the clarifications in a chat with reporters after receiving an outstanding award from Euro Knowledge Forum, led by Mrs. Yinka Fayomi, in Abuja.

The EFCC on Saturday sealed off five choice mansions allegedly traced to the Senate President.

The mansions were suspected to have been acquired with state funds while he was the governor in Kwara State between 2003 and 2011.

The assets were suspected by the EFCC not to have been declared by Saraki, who is being probed for his earnings and acquisitions in office as a governor between 2003 and 2011; how a N17 billion bond was spent; allocations to the state from the Federation Account while in office and some suspicious transactions by the state government in the administration of the outgoing Governor Abdulfatah Ahmed of Kwara State.

Saraki has, however, described the seizure as a witch-hunt and battle against a “political enemy”.

Magu, who insisted that the war against corruption is not personal, said he was not after anybody.

“Seriously, I am not slowing down because corruption is a national disaster. Every Nigerian should fight corruption whether you are in Nigeria or outside the country. Corruption is the mother of all evils. If you remove this disaster, you will have a peaceful country.

He said that no single EFCC official can lay claim to the feat achieved by the commission.

Magu said: “Nobody can arrogate the successes we have recorded to himself. Every staff of EFCC is also individually and collectively responsible to positive achievements we have.

“We also recognise the contributions of our stakeholders because this is a job that cannot be done in isolation. It is a work that nobody can do it alone. We strongly believe in all Nigerians and that is why I keep on appealing to Nigerians to take ownership of the fight against corruption. This is something one person cannot do.

“I am very happy that this award and everything said were in recognition of the efforts being put in the fight against corruption. I want to beg, I want to appeal to every Nigerian to support us because corruption is the mother of all crimes.

“If you remove corruption all these nonsense going on in Zamfara and Borno states would stop. Terrorism is being funded with the stolen funds, the laundered funds and it is coming back. That is why it is being sustained because somebody is giving them money. The boys who are behind are being paid by somebody. So, it is very hard for them to come back to the society. Sometimes if they come back, there is no job to be done. So, it attracts other people to join. That is why it gives room for the recruitment of more people to be on the side of the bandits.

Fayomi, said: “With the award, Magu is now one of the Africa’s change agents because at the event (for those who were there), Financial Times recognised them as the agents of change in Africa. So, we will go back to FTand passed this ceremony to them so that they can be upgraded.”