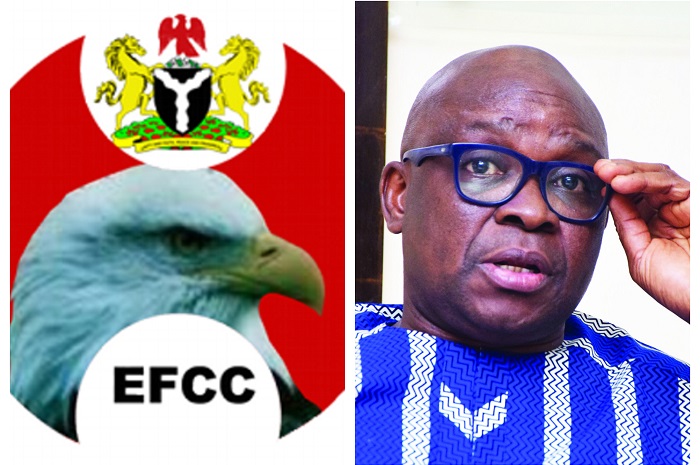 The trial of former Governor of Ekiti State, Ayodele Fayose who is standing trial for a N6.2 billion fraud, on Tuesday suffered a setback due to the absence of the Economic and Financial Crimes Commission (EFCC) prosecutor, Rotimi Jacobs.

The matter was slated for continuation of trial but Jacobs was conspicuously absent.

The development necessitated the presiding Judge, Justice Mojisola Olatoregun to adjourn the matter till May 21 for the continuation of trial.

In part of the charge, Fayose was accused by the anti-graft agency of receiving a cash payment of the sum of five million dollars, (about N1.8 billion) from the then Minister of State for Defence, Sen. Musiliu Obanikoro, without going through any financial institution and which sum exceeded the amount allowed by law.

He was also alleged to have retained the sum of N300 million in his Zenith Bank account and took control of the aggregate sums of about N622 million which sum he ought to have known formed part of crime proceeds.

The former Governor was also alleged to have used the sum of N200 million, to acquire a property in Abuja, in the name of his elder sister Moji Oladeji, which sum he ought to know also forms crime proceeds.

Fayose was arraigned by the Economic and Financial Crimes Commission in October 22, 2018, alongside a company Spotless Investment Ltd on 11 counts.

He had pleaded not guilty to the charges and the court had granted him bail in the sum of N50 million with one surety in like sum.

The EFCC has called several witnesses to testify against Fayose, one of which is former Minister of State for Defence, Senator Musiliu Obanikoro.