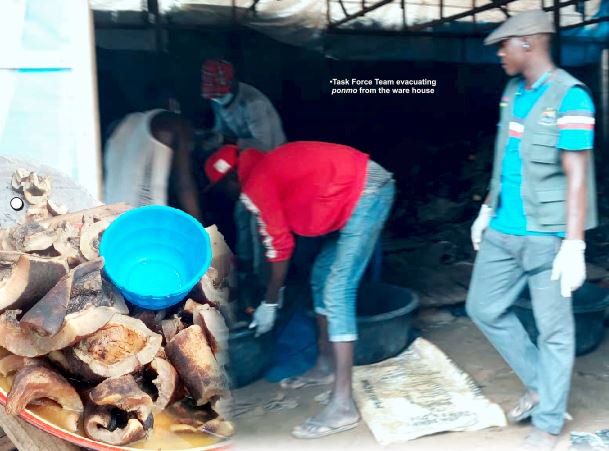 The relentless search for the syndicate behind the distribution of a poisonous brand of cowhide delicacy, popularly called ponmo, finally yielded result last Saturday.

Two weeks ago, reports emerged that poisonous ponmo was in circulation in Lagos.

And, following the wide reactions it generated, the Nation went about the task of unravelling the syndicate behind the unwholesome business and how they normally delivered the poisonous item at a big warehouse in lgando area of the Lagos metropolis.

Around 2:00pm penultimate Friday, the reporter had got a call from a dependable source who lived around College Road in lgando, alerting him to the arrival of a new consignment of the ponmo in question from Senegal, imported by some Lebanese businessmen and about to be offloaded at the usual warehouse in the vicinity, owned by one Mrs. Animashahun, an alleged major distributor of the item in the Southwest region.

Pronto, the reporter proceeded to a hotel close to the said warehouse with a view to ascertaining the arrival of the consignment of ponmo.

Behold, at exactly 1:45 am, the trailer that loaded the item was seen pulling up at the warehouse with some men engaged to offload the consignment into the warehouse at No. 9 College Road.

The reporter would later find that after the first story on ponmo was published penultimate Saturday, Mrs. Animashahun, a big distributor of the item, who was very boastful and hostile to the reporter during his first visit to the warehouse, had gone back to the community leaders with her lawyer, begging that she should be given the chance to sell her poisonous item until August ending when she would relocate her shop.

Seeing that her demand had met brick wall, she decided not to offload her consignment in the day time and chose to do so at the odd hours of the night when residents of the area must have slept.

When the consignment of ponmo arrived in the wee hours of the said day, it was accompanied by about seven casual labourers who offloaded it into the warehouse.

Animashaun’s plan was to wait till the morning of the following Monday to inform her numerous customers to come for their goods.

So after the offloading was completed around 3:00 am on that Saturday, she simply retired home for a good rest.

Unfortunately for her, she had barely settled down when some officials of the Ministries of Health and Agriculture got a tip-off that another consignment of poisonous ponmo had arrived the community.

They immediately went into action, putting in place the necessary strategy to nab the major distributor of the poisonous substance.

The Nation gathered that the operation, which lasted for about 10 hours before all the consignment could be removed, was a joint effort of the State Task Force, Igando Police Command and the Ministries of Health and Agriculture officials, who forced all their professionals out into the field to confiscate the poisonous substance.

Shedding more light on the incident in a chat with our reporter, the Permanent Secretary, Ministry of Agriculture, Dr. Olayiwole Onasanya, said immediately he got the tip-off from a concerned member of the public, he alerted all the relevant government agencies to be on the alert and get ready to move to the location.

He said: “As soon as we received the tip-off, members of the task force, the police and all our officers went into action and we arrested about six people. The consignment of poisonous ponmo was also confiscated. We are going to do a lab investigation on it. This is to assure the public that our team is on top of the matter and we are doing all we could to apprehend all members of the syndicate of this poisonous ponmo.

”People should be aware that this poisonous ponmo is processed for leather, but some people converted it into food for consumption, which is criminal. When you want to process ponmo for leather, there are some chemicals you use. One of them is slake lime otherwise known as calcium hydroxide, which is an alkaline chemical that is also Castro genic.

Onasanya warned food vendors to be careful and vigilant. “Anywhere they sight such ponmo, they should inform the Ministry of Agriculture or Health. This will assist us to arrest the situation. In recent times when people are talking about kidney failure, these are some of the things that cause it. Cancer is becoming problematic these days.

“We will not rest on our oars until we get to the root of the matter. We have also written a letter to the Quarantine Service. Anybody that is bringing such into the country should be properly investigated.”

Speaking in the same vein, the Commissioner for Health in the state, Dr. Jide Idris, who spoke with The Nation on the phone concerning the seized item last Saturday, said since the first publication by The Nation on April 27, his men, in conjunction with the Ministry of Agriculture, went into action to save the state from imminent epidemic.

“The breakthrough was for the people,” he said. “As a government, we are accountable to the people and we are ready to let them know that we are going to be there for them. We got the notice from a reliable source and l alerted my people and the Ministry of Agriculture, and we all swooped into action.

“The people should be vigilant and be sure of the source of anything they are consuming. The government is not stopping the people from eating ponmo, but the source must be verified. Everything we are doing is for the protection of the people so that they will not be consuming poison instead of ponmo.”

Idris, however, appealed to the people not to see the action of government as discouraging them not to take ponmo, but to see it as a collective venture in order to get rid of the few bad elements in the society who because of money are selling poisonous food substances to the public

“That is the area the people should also assist the government and report any poisonous food substance to the ministry. We have alerted the public and we are taking all the necessary measures to make sure that the poisonous substance is not in the public market,” he added.

Following the breakthrough, the Lagos State Government, in a press statement issued and signed by the Assistant Director of Public Affairs, Mr Tunbosun Ogunbanwo, on Monday, said it was a huge success to nab some members of the syndicate.

The statement reads: “The Lagos State Government, through the Ministry of Agriculture, State Taskforce on Environment and Special Offences Enforcement Unit and officers of the Nigeria Police Force, over the weekend seized 30 tonnes of animal hides and skin, popularly known as ‘ponmo,’ presumed to be poisonous and unhealthy for human consumption, at a warehouse located at College Road in Igando area of Lagos State.

“According to the Commissioner for Agriculture, Mr. Oluwatoyin Suarau, the special operation, which led to the arrest of operators of the factory, was based on a tip-off by concerned members of the public who became suspicious of activities in the warehouse where offensive stench oozes out during the preservation of the consignment.

“Suarau explained that the activity of the illegal ‘ponmo’ processing factory poses health and environmental hazards to the public and to the processors themselves.

“He stated that bonfire made with Jamaica rubber, which was also confiscated, in processing the ‘ponmo’, emits a thick toxin smoke which spreads within the complex and adjoining neighbourhood, adding that the smoke and the unhygienic way of processing the cow skin are harmful to human health.”

The statement added that “six persons connected with the poisonous ‘ponmo’ were arrested in the raid, stressing that they are now in police custody helping with ongoing investigation and will be prosecuted in accordance with the law.”

“Suarau, while stating that investigation into the source of the poisonous ‘Ponmo’ has since commenced, noted that the Ministry of Agriculture has set up a monitoring and investigation committee, headed by the Permanent Secretary, Ministry of Agriculture, Dr. Olayiwole Onasanya, to get the source of the poisonous ‘Ponmo’ and dislodge factories and illegal abattoirs where they are being processed.

“This committee would work with relevant government agencies to fish out any other illegal ‘Ponmo’ processing factory and illegal abattoir whose activities pose great danger to the public,” he said.

The commissioner appealed to relevant Federal Government agencies in charge of border patrol to step up activities to prevent entry of the poisonous products into the country.

“We will not rest on our oars to ensure that only hygienic meat and meat products are available in our abattoirs and market for human consumption.

“I, therefore, use this medium to warn operators of illegal abattoirs and ‘Ponmo’ processing outlets to desist from their criminal activities or risk facing the full weight of the law,” he warned.

The commissioner also called on members of the public to be vigilant and report any suspicious activity or sale of unwholesome foods and food products to the nearest local government office or the Ministry of Agriculture.