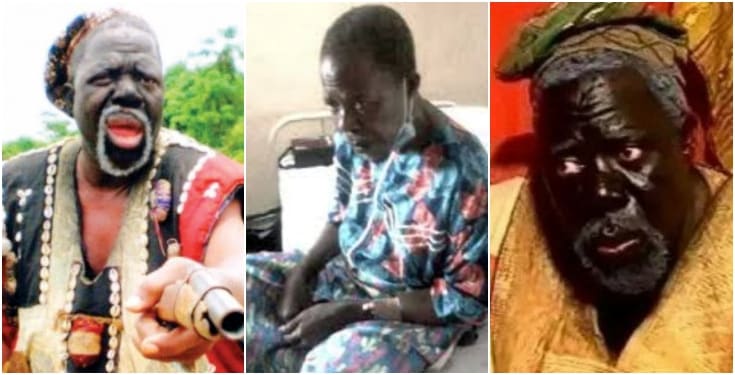 Veteran Nigerian actor, Fadeyi Oloro who has ben ill for some time, has cried out for help from well-wishers.
It is no longer news that famed Yoruba actor, Ojo Arowosafe, who is more popularly known as Fadeyi Oloro, is sick and in need of medical attention. In this interview with DUPE AYINLA-OLASUNKANMI, the actor, who is down with complications resulting from tuberculosis and presently staying in Ado-Odo, Ogun State, away from the buzz surrounding him, speaks on his state of health and other issues.

There have been lots of reports on your death?

How are you feeling?

I am not okay, that is because I have exhausted all the money with me for treatment. This is not my house. It was when the whole thing started that my family brought me here to keep a low profile. I used to stay at Meiran, Lagos State. And I have been reaching out to the public, but I had to face my God. I was not like this before, I could not walk. But I am better now. Right now, I don’t have enough money for the treatment I need. I cannot work at the moment; my shoulder, hand and legs are not responding well. I cannot stand on my own, I am usually assisted whenever I want to stand or use my walk (ing) stick as support. I am just pleading with my fans and lovers to continue and stand up for support, some people have tried, but I need more financial support.

Why are you just reaching out to the public?

I didn’t want to at first because I thought it was something I could take care of. I was paying for my drugs and treatment all by myself. It is because I don’t have the capacity anymore that is making me reach out to the public. I sold my car but the money was not enough, and I became handicapped. That was when I reached out to the public for assistance.

When did the ailment start?

It was about five years ago if I am not miscalculating.

You are reaching out to the public for support but what exactly is wrong with you?

My doctor is the one in the right position to tell what the ailment is. He has been discussing with some foreign doctors on my case. I have been treated, but there is no difference. If there is money, the ailment is something that can be treated here in Nigeria. There will be no need to waste money travelling abroad for treatment.

Could this be a spiritual attack, being a prominent actor?

I can’t really say. I have been instructed not to take any herbal medicine, except the drugs being given to me at the clinic. And with the way things are, the drugs are not working as expected. By now, I should be walking unassisted. And I have discussed this with my doctor; I was given drugs, but no changes.

Have you considered all you described as aging symptoms?

What is the next thing for you?

I plan to continue seeing my doctor. But I have to also consider alternative treatment now; herbs. I am not feeling fine. I just started talking and I was not like this before. If I can be walking unassisted and the parts of my body that are not responding well get back to their normal condition, I will be okay.

What do you want from the public and have your colleagues reached out?

No, I haven’t heard from them. And I do not blame them. They did the same to Baba Suwe and Alabi Yellow. Who am I to complain? It was when I saw that I might be dying that I called out to the public.

You are a known actor, but why is getting help taking so much time?

Yes, I am a known actor and I have worked with so many politicians while acting. If I could walk, I could have gotten into my car and gone to meet them. But I don’t even have a car anymore. There is no politician that I will stand in his presence and will say he cannot recognize me. I have also stopped producing movies too, because of the market we have. Movies are no longer sold out at the marketer’s places.

Why did you stop producing?

I had stopped producing about five years ago because of the high rate of piracy then. And also nobody could pay my money, just like the likes of Jide Kosoko, Taiwo Hassan. We are only being called to help them feature in movies. And because I was so passionate about my job, and the name I wanted to make, I had no choice but to help them. Some would come and say they want to pay me 50,000 or 100,000 for a week job. And I am a socialite.

Before I leave location, I have people who will come that they want to eat and it is out of that money that I will give to them. How many people do we tell this to? But the job continues. The market was what actually made me to stop working. It is my own job that I can say is working for me. I call people to come on set and I pay them off. And you cannot expect someone like me to produce a movie with N500,000. If I struggle to spend like millions on a movie, I am likely to go bankrupt because of piracy.

Let’s talk about your character, Fadeyi Oloro. What is the good and bad side of it?

See, acting is my passion and is still my passion. The good part is that it gave me name, money and fame. And I was also able to teach people that being wicked is not good to humankind. The character came to place when I acted the role of Fadeyi Oloro in the popular Jimoh Aliu’s TV production, ‘Yanpon Yanrin.’ He was my master. The character is actually the story of a man in his hometown in Oke Mesi, who was very popular for his wicked acts. One of his acts was going to the bush to pooh, and whenever he is coming back or going, and steps on anybody’s pooh, he would pack it bring it home and sprinkle charm on it and the person would die. All he did was to tell me the story of the man and I put in more efforts by bringing it into life and that was how the name stuck till date. One bad part was in the 80s, when some fans tore my cloth at Mushin, because of my character thinking I am a wicked person. I am a Christian. I attend Cherubim and Seraphim at Abule Egba, Divine Parish. If not that I am sick, during the week I might not have time to attend service, but Sundays I don’t miss service. I have had a young man in my church dumbfounded because he could not believe that I was in a church. It took him like a minute, before he could talk. I am only using my character in movies to teach, which is also my profession.

As a socialite, how many wives did you have and how many are with you presently?

I don’t have more than a wife.

Are you saying you have been married to one woman all your life?

No, I have married other women, but they usually leave me. But I am proud of just one who had children for me.

Why did they leave?

I don’t know why they left.

Tell us about your costumes, who does it?

I do my painting and costume myself. We are talking freely with each other now. But if I excuse myself and ask you to give me some time, by the time I go in and come back, you will run away. I will have to be the one to call you back, that it is still the same person that excused himself. That is what is being called a professional. The character has done a great deal for me, as an actor. Most people do not even know my name. Sometimes I challenge them whenever they call me Fadeyi Oloro. When I put on my costume, I am another person.

Do you plan to return to acting when you fully recover?

I have not quit acting. As I am now, not being able to walk, if I have people call me and say I don’t need to walk about, I will gladly put on my costume and get into character.

We are yet to see anybody take up your character since your absence?

It is God’s gift. If I am coming back again and it will be my own production. I will not be coming under any group. It will be a personal production and will be telling people I am back again. I am not dead. This I believe will pull more crowd.

How much are you looking at for you treatment?

Even If I am given a million, I cannot really say this is the amount I need. The call I received some minutes ago is from a doctor who is based abroad and presently in Nigeria. He said he is in Osun State at the moment, but will send me a message to go to a hospital in Ogun State. He asked what the cause of my sickness is and I said tuberculosis, which can cause a whole lot of other things. And I asked him about the cost, he said I should forget about money for now and go there first. He said I should forget about the past treatment that they will have to start all over again. That they will treat me until I am back on my feet and then money can be discussed.

What is your wish?

I want people to stand up and help me now that I need help. I don’t want people to come to my grave when I am no more and come and be crying. It is now that they should come out and help me financially because I want to be back on my feet. I have a long way to go in this industry.