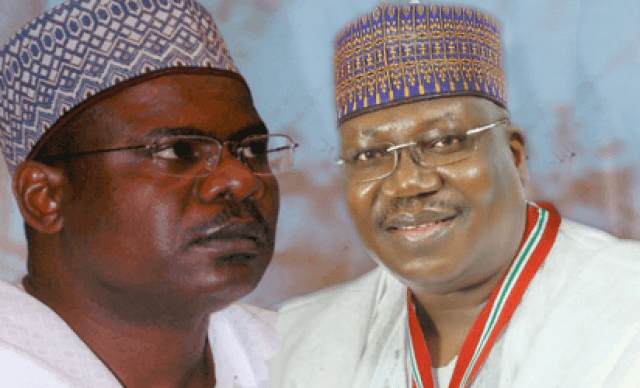 The race for the position of Senate President in the 9th National Assembly will likely be a two-horse race between Senator Ahmad Lawan, incumbent Senate Leader, and Ali Ndume (APC-Borno South).

Sources said the PDP may decide the contest as the gladiators are already warming themselves to the opposition party’s senators to outdo each other.

Sources told Daily Independent that the third contender for the position, Danjuma Goje, the lawmaker representing Gombe Central, may have technically withdrawn from the race due to his travails in the hands of the Economic and Financial Crimes Commission (EFCC).

The anti-graft agency, which is prosecuting Goje on an amended N5 billion fraud charge, had last month appealed the judgment of a Federal High Court in Gombe, which partially upheld a no-case submission against Goje, a two-time governor of the state.

A ranking senator, Goje had said he would formally declare for the position of Senate President after the passage of the 2019 budget, saying he delayed his declaration because of his commitment towards the quick passage of this year’s budget which was before his committee.

Ten days after the passage of the budget, Goje is yet to make his intention known while many groups have been mounting pressure on him to do so.

“Goje is not likely going to declare. From the look of things, he is afraid. The EFCC has appealed his case, and he is almost like caged. The contest right now is between Lawan and Ndume”, the source said.

On whether a dark horse may emerge, our source said: “Abdullahi Adamu may likely be a dark horse” but added that the former Nassarawa governor was only using the contest to negotiate for the position of Majority Leader in the Ninth Assembly.

“Even if he raises his hand on that day and somebody nominates him, he will say he is stepping down for another senator,” the source said.

Another source, however, said Goje’s reluctance might be a strategy for a last minute entry into the race.

According to him, “It may just be a strategy, after all, by Goje to enter into the race at the last minute. Between now and June is a very long period in politics.

“I know of someone who is interested in becoming Deputy Senate President but, right now, has not declared.”

It was also gathered that the PDP senators-elect were now divided on whether to align with either Ndume or Lawan.

It was gathered that the PDP lawmakers are planning to deliver a bloc vote to any candidate they back for the race.

Speaking on whether the PDP would give directives to its members on who to support, Kola Ologbondiyan, National Publicity Secretary of the PDP, Thursday, insisted that the party was yet to decide its stand on the leadership tussle.

Also speaking to our correspondent, Ndume said he was not in the race to bargain for any position or be offered anything else by the party leadership or presidency.

He said: “I want to be the Senate President not because I am better than the other 108. My aspiration is about deepening democracy and exercising my fundamental right as guaranteed by the constitution.

“I am not into this business for negotiation or for me to be offered something. In the Senate, I have been the leader; I have been a committee chairman, and also been without a committee; I have equally, at a time, been on suspension.”