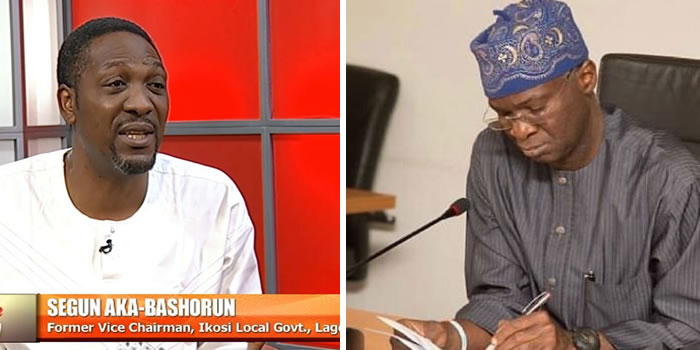 Segun Aka-Bashorun, a former Vice-Chairman of Kosofe Local Government Area in Lagos State has said former Governor Babatunde Fashola had put in place mechanisms to promote transparency in local governments in the state but was prevented by “the godfather.”

Aka-Bashorun, who was a guest on Channels TV said Fashola had set up independent audit mechanisms to ensure that the books of local governments were looked into periodically.

He, however, said when Fashola began to “block all conduit pipes through which funds were being diverted,” the local government chairmen quickly ran to the godfather who, in turn, allegedly asked Fashola to face state government affairs and leave the local governments alone. Aka-Bashorun however did not name the alleged godfather.

The former LG boss said, “In the time of Fashola as governor, he realised that there was a certain godfather that was holding his hands back when he was trying to force the local government chairmen to perform because he wanted them to perform.

“He then set up a body of civil society organisations and engineers to go and visit each local government to look at their books and show them the contracts. Everything in their budget that they had spent money on, they should go to each of those areas and verify them.”

“Fashola tried it (reforms) because he wanted them to perform, but they ran to their godfather and said, ‘See, this governor is disturbing us, checking all our books, we are in trouble, what are we going to do?’ They stifled the governor and said, ‘Leave the local governments alone; go and do your own job.” He then threw a challenge to his interviewer: “Name one governor that is fighting for local government.”

The former LGA vice chairman commended the Nigerian Financial Intelligence Unit for issuing new rules which will protect local government funds from governors. Aka-Bashorun, however, said there was the need for LGAs to be given full autonomy because of the nature of state politics, especially in places like Lagos. He alleged that employment at the local government was usually given to only party faithful and their families, adding that contracts are only awarded to party chieftains “who cannot be questioned even if they fail to deliver.”