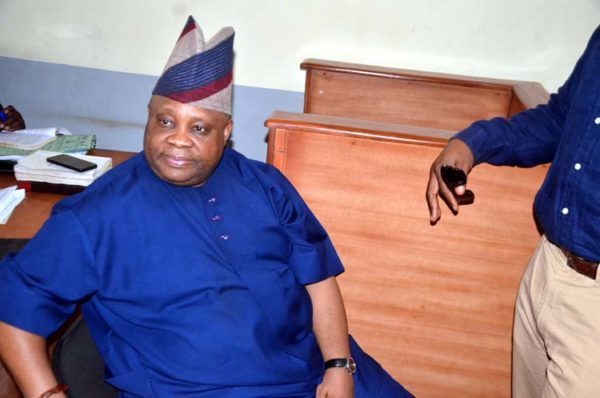 A Magistrate Court in Mpape Area of the Federal Capital Territory has granted bail to the Candidate of the Peoples Democratic Party in the 2018 governorship election in Osun State, Senator Ademola Adeleke, in the sum of 2 million naira

Senator Adeleke was arraigned before the court on a five count charge bordering on alleged false statement and forgery.

Judiciary correspondent Celestina Iria reports that the Senator representing the Osun west senatorial district of Osun State, pleaded not guilty to the 5 count charge of alleged false statement and certificate forgery, brought against him by the Nigeria Police.

Mr Adeleke was brought before a Magistrate court in Mpape, presided over by Mohammad Shehu, after he honored an invitation extended to him on Monday by the police.

Counsel to Mr Adeleke, told the court that it would impracticable for the court to proceed with the arraignment on the grounds that the defendant is already standing trial on the same charge in two different High Courts.

He informed the court that Justice Inyang Ekwo of the Federal High Court Abuja, had on Friday, 3rd May granted Mr Adeleke permission to travel abroad for medical attention and ordered the police not to hinder his medical trip scheduled for 7th May 2019.

He also presented before the court another order of a High Court in Osun, which specifically ordered the police not to arrest or prevent Mr Adeleke from traveling abroad for medical attention.

Counsel to Mr Adeleke subsequently move an application for his bail.

Although the prosecution counsel opposed the application on grounds that the defendant did not show evidence of ill health, Justice zubaru, in his ruling, granted bail in the sum of 2 million naira and directing him also to produce a surety in like sum, who must be a resident of the court’s jurisdiction.

The Magistrate held that going by the hierachy of court, the Magistrate Court is bound by the orders of a High Court. He further held that the court cannot stop the defendant from enjoying his fundamental rights as ordered by the High Courts.

The matter was adjourned to 24th of June for commencement of trial.