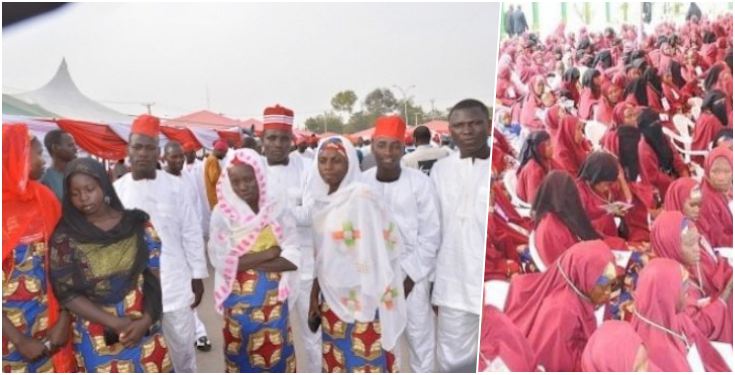 On Sunday, Kano State Government revealed it spent over N300 million on mass wedding for 1,500 couples in the state.‎

The wedding prayer was conducted by the Chief Imam of Kano, Prof. Sani Zahradeen, was presided over by the Emir of Kano, Muhammadu Sanusi II and Governor Abdullahi Ganduje at the Kano Central Mosque.

Ganduje said that the gesture was aimed at further reducing the problems associated with the high number of unmarried youths in the state. The governor urged the new couples to uphold the trust reposed in them by the state government.‎

He also appealed to wealthy individuals to complement the efforts of the state government.‎ Ganduje said that the couples were selected and screened from each of the 44 Local Government Areas (LGAs) of the state.‎

“The beneficiaries were selected from each of the 44 LGAs of the state by the committee shouldered with the responsibilities of selecting and screening eligible beneficiaries,’’ he said. He noted that more than N300 million was spent by the state government to sponsor the weddings, including the provision of complete sets of beds, side mirrors, wardrobes and mattresses that would all be provided, to each couple.‎ ‎

Ganduje said that the state government would pay N20,000 dowry for the couples and N10,000 as start-up capital to each bride. ‎He said that medical tests, including HIV/AIDS test, were conducted on the couples in order to ascertain their genuine health status before the marriage.‎‎