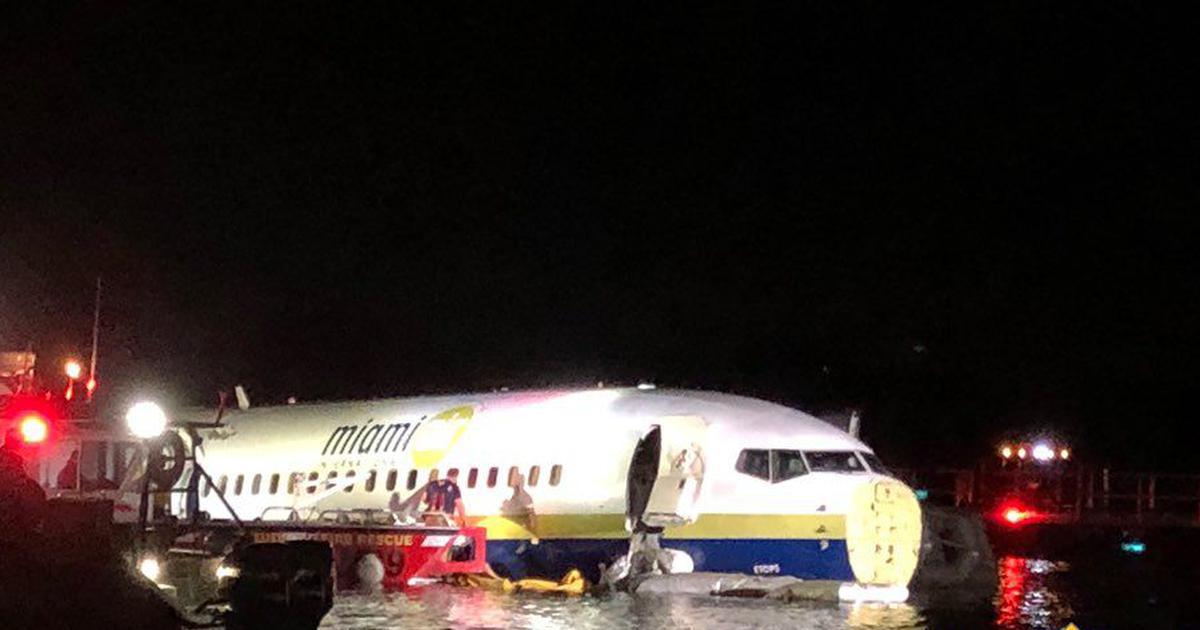 A passenger plane has slid off a runway in the US state of Florida, ending up in a river after landing during a thunderstorm.

There were 136 passengers on the military charter plane which ditched into the St John’s river in Jacksonville.

Boeing jetliner with 143 people aboard from the US outpost at Guantanamo Bay, Cuba, slid off a runway into a shallow river in Jacksonville, Florida, on Friday while attempting to land at a military base there during a thunderstorm, injuring 21 people.

According to NDTV, there were no reports of fatalities or critical injuries, with the Jacksonville Sheriff’s Office saying on Twitter that all 21 of the injured were taken to a hospital where they were listed in good condition.

The plane, a chartered Boeing 737-800 arrived from Naval Station Guantanamo Bay in Cuba with 136 passengers and seven crew members, but it crashed into the St Johns river at the end of the runway at Naval Air Station Jacksonville at about 9:40 pm local time, a spokesman for the Florida air base said.

“The plane was not submerged. Every person is alive and accounted for,” the sheriff’s office said on Twitter.

The sheriff’s tweet was accompanied by two photographs showing the plane, bearing the logo of Miami Air International, resting in shallow water and fully intact.

The head of Boeing used his first shareholder meeting after the fleet of 737 MAX was grounded to try to assure shareholders, airline passengers, and the media that the plane is safe.

“No fatalities reported. We are all in this together,” Curry said in a separate tweet.

READ  2019: Atiku under fire over ‘extravagant trip’ to Dubai with Obi, Ben Bruce, others

A passenger on board the plane, attorney Cheryl Bormann, told CNN in an interview that the flight, which had been four hours late in departing, made a “really hard landing” in Jacksonville amid thunder and lightning.

“We came down, the plane literally hit the ground and bounced. It was clear the pilot did not have total control of the plane. It bounced again,” she said, adding that the experience was “terrifying.”

Bormann said she hit her head on a plastic tray on the seat in front of her as the plane veered sideways and off the runway. “We were in the water, we couldn’t tell where we were, whether it was a river or an ocean.”

The military base is situated on the western bank of the St Johns River about 8 miles south of central Jacksonville, in the northeastern corner of Florida about 350 miles north of Miami.

Bormann described emerging from the plane onto the wing as oxygen masks deployed and smelling the jet fuel that she said was apparently leaking into the water.

Bormann, from Chicago, said that most of the passengers were connected to the military and helped each other out of their seats and onto a wing, where they were assisted after some time into a raft.

Miami Air International is a charter airline operating a fleet of the Boeing 737-800, different from the 737 MAX 8 aircraft that has been grounded following two fatal crashes involving that plane.

A Boeing spokesman said that the company was aware of the incident and was gathering information.