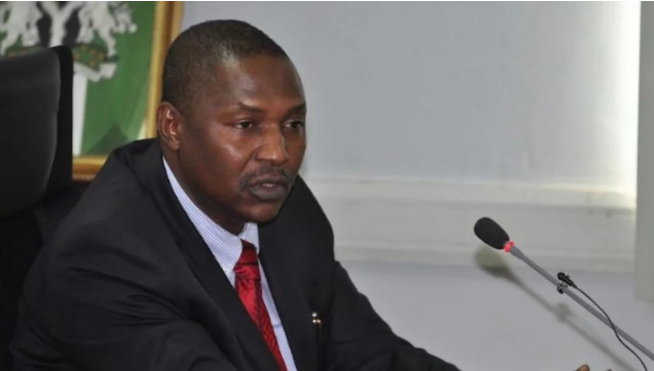 The Global Integrity Crusade Network has given comprehensive and cogent reasons the Islamic Movement in Nigeria, IMN, should be proscribed and labeled a national terrorist organisation.

The group, in a letter addressed to the Attorney-General of the Federation and Minister of Justice, Abubakar Malami, gave 21 reasons the ministry should act fast and outlaw the group for constituting nuisance in the country.

This call is coming barely one week after another civil society organisation, the Coalition for Nigeria, had called on the Nigerian government to outlaw the Islamic Movement in Nigeria, IMN, saying that Iran was discreetly breeding another terrorism sect in Nigeria through IMN extremists.

The Global Integrity Crusade Network in a letter signed Bashorun Oladokun Abdulwajeed, Director of Special Duties, which was copied to President Muhammadu Buhari, GCFR, the Director-General, Department of State Services (DSS) and the Inspector-General of Police, claimed that the IMN has been linked to recruitment of members of foreign terrorist groups such as the Islamic States (ISIS), Al-Qaeda, Al-Shabaab, and so on, contrary to Section 10 of the Terrorism (Prevention) (Amendment) Act, 2013 and should not be allowed to operate in Nigeria.

The letter is titled: “21 REASONS WHY YOUR OFFICE MUST URGENTLY DESIGNATE THE DREADED ISLAMIC MOVEMENT IN NIGERIA (IMN) AS A TERRORIST ORGANIZATION IN LINE WITH THE KADUNA STATE WHITE PAPER ON ZARIA CLASHES OF DECEMBER 2015.”

It reads: “We at Global Integrity Crusade Network (GICN) have keenly monitored activities of the Islamic Movement in Nigeria (IMN) otherwise known as Shiites within the past few weeks and note with bitterness that members of the organization have continued to breach national peace, cause mayhem and make life unbearable for innocent citizens, especially in the Federal Capital Territory Abuja and its environs.

“Only on Wednesday, April 24, 2019 members of IMN numbering in their thousands, clothed with intimidating regalia and chanting war songs barricaded the main entrance leading to the National Assembly Complex, thereby obstructing vehicular movement and legislative activities for the day. There is no doubt that IMN is hell bent on sustaining this kind of violent protests in the city of Abuja under the guise of “demanding” for the release of their acclaimed leader, Sheikh Ibraheem El-Zakzaky who has been in protective custody and is presently facing criminal prosecution before the High Court of Kaduna State. It therefore follows that unless and until something tangible is done to exterminate the group at once, the much anticipated peace in the North and Nigeria as a whole will remain an illusion.

“We note that all recommendations pertaining to the Federal Ministry of Justice were referred to your office for appropriate consideration and action, particularly with regard to prosecution of certain offenders and designating IMN as a terrorist group that it truly is.

“We, like other well-meaning Nigerians, are worried that after over two years of receipt of the White Paper, your office has not deemed it fit to take decisive actions against IMN despite the fact that the group, which has already been outlawed by Kaduna State Government, would stop at nothing to destabilize our dear country. It is against this backdrop that we hereby write to give you 21 reasons why you must not delay further in using the sledge hammer by labelling IMN as a terrorist organization and causing it to face the attendant consequences of being so labelled according to the extant laws of the land. The said 21 reasons are as stated below: –

“1. That IMN is not a registered organization at the Corporate Affairs Commission under Part C of the Companies and Allied Matters Act, CAP C20, Laws of the Federation of Nigeria, 2004. This implies that it cannot be sued, tried or convicted as an entity for crimes committed by its members and has no basis to exist in Nigeria.

“2. That IMN has never ceased to be a violent organization as deduced from the wealth of oral and documentary evidence made available to the Judicial Commission of Inquiry.

“3. That the December 2015 clash reveals caches of arms and ammunitions purported to have been procured by IMN with the backing of Islamic Republic of Iran and Lebanon, hence the need to ban the organization.

“4. That IMN has built a leadership since the past three decades that has been steadfast and deliberate in habitual acts of lawlessness and defiance of constituted authorities in Nigeria.

“5. That Sheikh Ibraheem El-Zakzaky being the overall temporal and spiritual leader of IMN was notorious to be in constant clash with all the successive governments of Nigeria from Shagari through Buhari (as Military Head of State), Babangida to Abacha and throughout the 4th Republic.

“6. That Sheikh Ibraheem El-Zakzaky believes from the beginning and probably would never change his mindset that there is no peaceful way for Muslims to attain their need for Sharia implementation so that Nigeria solely receives commandments from Allah. This belief is unbecoming, evil and unacceptable in the light of Section 10 of 1999 Constitution of the Federal Republic of Nigeria (as amended) which clearly stipulates to the effect that Nigeria operates a secular system and the Government of the Federation or of a State shall not adopt any religion as State Religion.

“7. That IMN has by its activities and characters brazenly breached Section 1 Subsection (1) of the Terrorism (Prevention) (Amendment) Act, 2013 through commission of acts of terrorism and financing of terrorism.

“8. That El-Zakzaky has been arranging, managing and participating in meetings alongside members of IMN which in his knowledge are connected with terrorism. This offence is punishable pursuant to Section 4 of the Terrorism (Prevention) (Amendment) Act, 2013 which prescribes imprisonment for a term not less than 20 years.

“9. That El-Zakzaky receives funds from the Islamic Republic of Iran, Lebanon, Ghana and Niger Republic which he channels into rendering all manners of support to his followers. He also distributes Islamic literatures, proliferates arms and light weapons as well as incites members of IMN to commit terrorist acts with the aim of dislodging the government of Nigeria contrary to Section 5 of the Terrorism (Prevention) (Amendment) Act, 2013 and punishable upon conviction for a term not less than 20 years.

“10. That there are overwhelming evidence from recent activities of IMN to show that the group is a law unto itself. Members of IMN are fond of confronting law enforcement agencies in order to rescue any of its members arrested or kept in custody in connection with acts of terrorism. This is a clear breach of Section 6 the Terrorism (Prevention) (Amendment) Act, 2013 and the offence attracts imprisonment for a term not less than 20 years.

“11. That Sheikh El-Zakzaky is notorious for training his guards popularly called Hurras in the practice of military exercise and in the making or use of explosives and other forms of lethal weapons without being authorized under the Nigerian laws to do so. This constitutes an offence under Section 7 of the Terrorism (Prevention) (Amendment) Act, 2013 and carries 20 years as punishment upon conviction.

“12. That the petrol bombs, lethal weapons and other explosives used by members of IMN during their clash with the Nigerian Army in Zaria, Kaduna State in December 2015 were all provided by their most revered leader El-Zakzaky with support from foreign funders and sympathizers. This is an offence under Section 9 of the Terrorism (Prevention) (Amendment) Act, 2013 and is punishable with imprisonment for not less than 20 years.

“13. That IMN has been linked to recruitment of persons to be members of foreign terrorist groups such as the Islamic States (ISIS), Al-Qaeda, Al-Shabaab and so on contrary to Section 10 of the Terrorism (Prevention) (Amendment) Act, 2013.

“14. That the innocent citizens of Nigeria who now live in fear of IMN are entitled to protection of their human rights under Chapter IV of the Constitution by the Federal Government and office of the Attorney-General and Minister of Justice should no longer condone unlawful killings, grievous bodily harm, maiming, road blocking and destruction of properties by IMN.

“15. That IMN has for the past 30 years operated outside the laws of Nigeria but rather chose to adopt the Funtua Declaration as their flagship expression of the ideology of confrontation with the Nigerian State, its legal system and security agencies.

“16. That IMN has shown by the infractions committed since its existence that it is not different from Boko Haram and the Indigenous People of Biafra (IPOB), which have since been profiled, disbanded and labelled as terrorist groups both in Nigeria and abroad.

“17. That to avoid proscribing IMN as a matter of urgency after so much agitation in that regard from overwhelming population of Nigerians will send the wrong signal to other law-abiding organizations and embolden the IMN to continue to defy all constituted authorities.

“18. That your swift implementation of the recommendations of the Kaduna Judicial Commission of Inquiry as contained in the White Paper relating to proscription of IMN is key to totally ending the menace of terrorism, incessant clashes, threat to peace, law and order in Nigeria.

“19. That no singular individual, group, organization or institution is above the law or bigger than the Nigerian State as to be allowed to rebel constituted authorities in a manner that threatens national security.

“20. That the designation of IMN as a terrorist group will go a long way in reducing or completely dissuading other countries from interfering in the internal affairs of Nigeria.

“21. That there are no longer prospects of constructive engagement with the leadership of IMN, as they seem to have made up their minds to declare war against Nigeria through sustained violent protests and other terrorist activities.

“In conclusion, we strongly advise that the Nigerian State should commit itself to transparency, accountability and good governance to create within citizens a sense of belonging to a nation that provides for their welfare and security as stipulated under the Constitution. The State is effective in leadership if it has legitimacy and such legitimacy itself is a function of the government showing capacity to carry out its responsibility of providing for the public good.

“This letter gives the Attorney-General of the Federation and Minister of Justice yet another opportunity to rekindle the hope of Nigerians that President Muhammadu Buhari, GCFR in his Next Level agenda is truly ready to guarantee maximum security for the entire country.

“No doubt, innocent Nigerians have suffered enough in the hands of the deviant organization called IMN. It is our expectation therefore that your office will within the next 7 (Seven) working days from the date hereof consider the 21 reasons given above for the proscription of IMN, make a public statement with regard thereto and take necessary legal steps to do the needful. We hold office of the Attorney-General of the Federation and Minister of Justice in very high esteem but will not hesitate this time around to drag it before the court with a view to securing an Order of Mandamus compelling it to perform its statutory duty.”