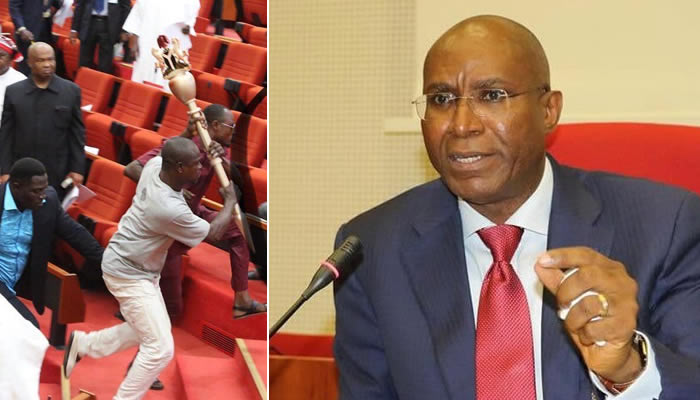 Senator Isah Hamma Misau (PDP-Bauchi) has lambasted Sen. Ovie Omo-Agege for abusing the judicial process and the generosity of the Senate with some of his actions which seek to bring down the legislature.

The lawmaker was reacting to the court injunction which Omo-Agege obtained, restraining the leadership of the Senate and House of Representatives from considering the report of an ad-hoc committee set up by both chambers to investigate the invasion of the Senate Chamber by some hoodlums who carted away the mace.

The statement added, “The court cannot stop the legislature from the performance of its constitutional duties. Some hoodlums attacked the Senate chamber on live television during plenary and inflicted injury on workers on April 18, 2018.

“The leadership set up an ad-hoc committee to investigate what happened and recommend measures to prevent a recurrence and months after the committee had submitted its report, a Senator rushed to court when he heard that there was a push for the report to be considered before the life of the present Senate expires.

“He wants to prevent the report of the committee from being considered. In fact, his action has shown the reason why the Senate should actually go ahead and consider the report and act on it, no matter the odds.

“Omo-Agege has dared the Senate. Now, he should face the music. I blame the Senate President, Dr Abubakar Bukola Saraki for delaying on the consideration of the report.

“The Eighth Senate is winding down and the general view of members is that before we leave, all outstanding reports should be considered and acted upon.

“If Omo-Agege does not have any hidden agenda, why is he seeking to stop the consideration of the report, after all, he was given fair hearing to state his own case before the panel?

“He is probably running helter-skelter now because he wants to become Deputy Senate President and he knows that if we adopt the recommendation of the committee, the outcome will affect his ambition. This is the reason why people should always consider the future implications of their actions”, he stated.