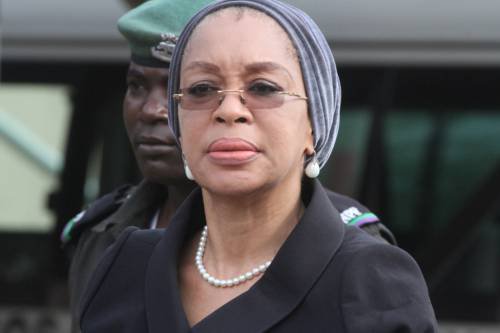 There was a drama at the premises of an Ikeja High Court earlier on Tuesday as officials of the Economic and Financial Crimes Commission (EFCC) re-arrested a former judge of the Federal High Court, Justice Rita Ofili-Ajumogobia after she was discharged of all corruption charges against her.

According to reports gathered, the EFCC surrounded Mrs Ofili-Ajumogobia as she attempted to leave the courtroom at 10.24 a.m. after the ruling by Justice Hakeem Oshodi.

Upon sighting the officials, the judge made a hasty retreat and went back upstairs into Justice Oshodi’s courtroom to seek the protection of the court from the EFCC operatives.

Justice Oshodi, when notified about the development, said there was nothing he could do as “the file had been closed.”

Femi Fani-Kayode@realFFK
EFCC’s case against Justice Rita Ofili-Ajumogobia was thrown out by Justice Oshodi of the Ikeja High Court today with harsh words. Despite this she was held hostage by the EFCC in the court premises for one hour and now she has been re-arrested and taken to their Lagos office…

Sir Earnest@EarnestSir
The same @officialEFCC might re-arraign her before Justice Dada who is ever prepared to fulfill their wishes regardless of its illegitimacy.

The embattled former judge and her husband, who was with her, were observed frantically making various phone calls.

Godwin Obla, a lawyer and Mrs Ofili-Ajumogobia’s co-defendant, was however allowed to exit the court premises by officials of the EFCC.

However, when Justice Oshodi’s court rose, she was arrested at 11.47 a.m. by some EFCC officials who whisked her away in a white Hilux van with Abuja plate number BWR637AT.