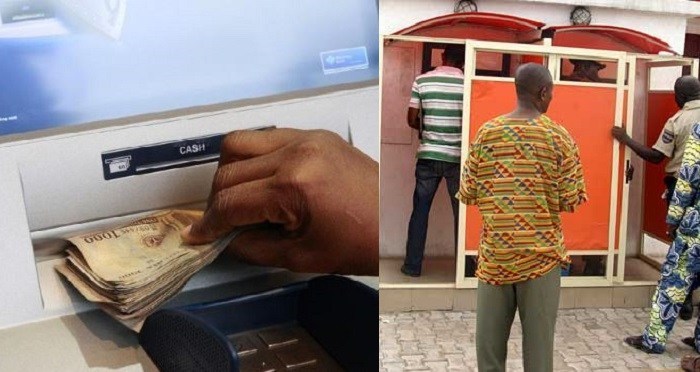 A young man identified as Azeez Morufu was caught while allegedly collecting money from an Automated Teller Machine (ATM) without using naira MasterCard, popularly known as ‘ATM card’ in Ibadan, the Oyo State.

According to DailyPost, Morufu was caught early Tuesday at ATM points of one of the new generation banks beside the Ibadan zonal headquarters of the Federal Radio Corporation of Nigeria (FRCN) on Oba Adebimpe Road, Dugbe.

It was learnt that the suspect was caught when a passer-by saw him with a huge amount of money at the machine.

He added that Morufu who made some confessions after he was caught said he has a code he always inputs on the ATM to dispense without a card.

An eye witness, who drew the attention of others to the scene, explained that she became suspicious when she noticed the young man in dirty clothes was withdrawing a huge amount from the ATM.

She said that the suspect has, however, been handed over to police from the Iyaganku division.

However, all efforts made to get a statement from the spokesman of the state police command, Mr. Olugbenga Fadeyi proved abortive as at the time of filling this report.

Several calls put through Fadeyi’s line were not answered while an SMS sent to him asking him (Fadeyi) to respond has not been replied.