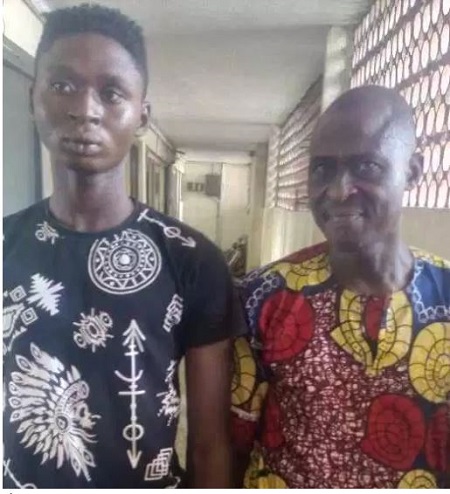 It was learnt that the girl exposed them when her mother suspected some changes in her and discovered that she was pregnant.

The Lagos State Police Command has arrested a father and his son for allegedly defiling and impregnating a 13-year old girl (name withheld) at Egbeda area of Lagos, Southwest Nigeria.

The suspects are Kabiru Oke, 44 and Faruq Oke, 19. They were arrested at No 1 Olatikupo Street, Egbeda, where the victim lived with them.

A statement issued by Police Public Relations Officer, PPRO, Bala Elkana on Sunday said on March 27, 2019, the Command’s Gender Unit received a complaint of defilement of a minor reported by the mother (Name withheld) against the husband of her elder sister Kabiru Oke and his son, Oke Faruq.

“The survivor/victim (which name is withheld) lived with the perpetrators for a couple of years. The unholy affairs between the minor and the first suspect (Kabiru) started on 20th October, 2018 with the suspect having constant sexual intercourse with the survivor.

“The second suspect (Faruq), being the son of the first suspect started having Unlawful carnal knowledge of the same minor on 10th January 2019. The suspects have constantly threatened to kill the victim if she ever tells anybody about the affairs,” he said.

According to Elkana, the girl exposed them when her mother suspected some changes in her and discovered that she was pregnant.

He said the girl was taken to Mirabel Centre by the Gender Unit for medical examination and that the two suspects were arrested and charged to Magistrate Court 2 Ogba for defilement.

The case was adjourned till May 13, 2019 while the suspects were remanded at Kirikiri prison.