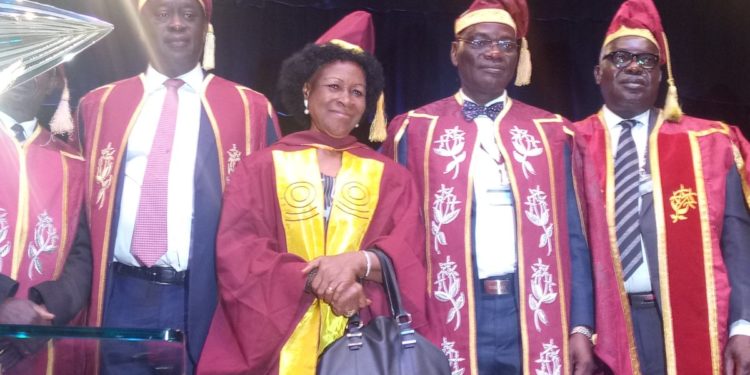 A woman has been found out to have graduated at the age of 77 at the UNILAG 50th convocation.

A 77-year-old female retiree was among the 1,008 students of the Faculty of Education, University of Lagos ( UNILAG), who were awarded first degree on Tuesday at the institution’s 2017/2018 Convocation Ceremonies, The Nation reports.

The retiree, who refused to mention her name to journalists, said that the achievement was her dream come true.

“I studied guidance and counselling and I am most grateful to God Almighty who made me to see this day.

“I will not like my name to be mentioned because I know where I am coming from and what I am protecting.

“I am a retired officer. I have worked in a lot of countries around the world and also in Nigeria, where I finally retired,’’ she told journalists.

She added that she went for the degree programme because she did not want to sit at home after retirement.

“You know when you retire like that, you will not want to stay at home and be dying slowly,” she said.

According to the retiree, no one should feel too old to go to school as learning remains a life-long adventure.

“Education has no limit. It is from cradle to death in order for one to add value to the society,’’ she said.

She advised parents to do their best to give their children the best education.

“Every woman who has an opportunity of having a child must strive to bring that child up properly through education so that he or she does not become a problem to the society in future,’’ she urged.

READ  38% of Nigerians are illiterates

Vice Chancellor of the University, Prof. Oluwatoyin Ogundipe, told the congregation that a total of 3,795 students from the Faculties of Arts, Education and Environmental Sciences would be conferred with first degree on Tuesday.

He said that students from the Faculties of Science and Social Sciences would also be awarded first degree on Tuesday – the first day of three-day convocation ceremonies.

According to him, the university will graduate a total of 12,843 students at the ceremonies.

Ogundipe said that 7,438 would be awarded first degree and 5,405, postgraduate degrees.

Ogundipe said that the Faculty of Arts, Education and Environmental Sciences would graduate 603, 1008 and 382 students, respectively, on Tuesday.

“We are also graduating a total of 615 students in the third class category, while 99 others will be graduating with pass grade,’’ Ogundipe, the university’s 12th Vice Chancellor, said.

He said that the university’s management had pursued uncompromising academic standards, local and global networks and innovative fundraising mechanism in an effort to make the institution better.