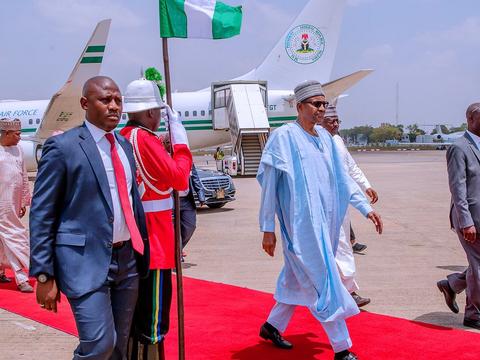 President Muhammadu Buhari has returned to Abuja after participating in the Saturday’s Gubernatorial and State House of Assembly election in his hometown, Daura, Katsina State.

NAN reports that the presidential aircraft conveying the president, his wife Aisha Buhari and some of his aides landed the at presidential wing of the Nnamdi Azikiwe International Airport, Abuja, at about 12.30p.m.

The president was received at the airport by his Chief of Staff, Malam Abba Kyari, the Minister of the Federal Capital Territory (FCT), Malam Muhammed Bello and other presidential aides as well as government officials.

While in Daura, the president exercised his civic responsibility on March 9 at the polling unit 003, Kofar Baru III (A and B) Daura, Katsina State, where he voted for a governorship candidate and member of the state house of assembly that would represent his constituency, Daura.

At the end of the exercise on Saturday, President Buhari successfully delivered his polling unit to the All Progressives Congress (APC) governorship candidate for the state, Aminu Masari, with 370 votes.