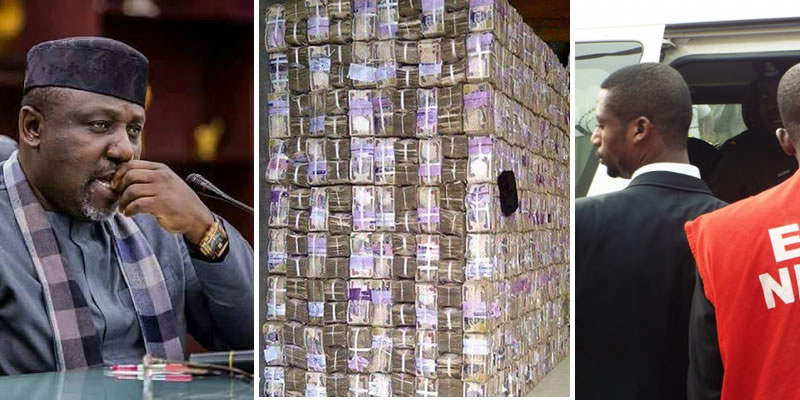 The Economic and Financial Crimes Commission (EFCC), Enugu Zonal Office, has arrested the Acting Accountant-General of Imo State, Mr. Uzoho Casmir, on suspicion of laundering the sum of N1.050 billion.

The cash was allegedly withdrawn in three tranches between Tuesday and Thursday and EFCC believes that the money was meant for vote buying.

The suspect, who was arrested on Thursday, was in custody at press yesterday.

The EFCC, it was also gathered, is probing whether the cash was mopped up on the orders of the governor of the state, Owelle Rochas Okorocha.

An EFCC source said: “We have intelligence report that cash was withdrawn through a new generation bank for use by the state government.

“Casmir’s arrest followed intelligence report that the state government intended to use the money for vote buying in favour of a particular candidate in Saturday’s gubernatorial election.”

He said intelligence further revealed to the EFCC that Casmir withdrew the amount in three tranches between Tuesday and Thursday this week in the following order: N200 million on Tuesday, N500 million on Wednesday and N350 million on Thursday.

The source claimed that the EFCC had taken pre-emptive steps to stop further withdrawal from the affected accounts.

“We have blocked the traced accounts while the arrested Accountant General has been providing useful information to the Commission,” he said.

Casmir, he said further, was before his appointment a Director of Finance in Okorocha’s government and was “in 2016 questioned over N2 billion bailout fund given to the state by the Federal Government for the payment of salary arrears of civil servants.”

The Acting Head of Media and Publicity of EFCC, Mr. Tony Orilade, confirmed the arrest of the Imo State Accountant-General.

According to a statement by the Acting Head of Media and Publicity of EFCC, Mr. Tony Orilade, the defendants were alleged to have fraudulently obtained various sums of money from their victims under the pretence of investing the money in a phony ‘Gideon Foundation Project’.

The statement said: “The defendants were also alleged to have promised to share 40 per cent dividend from the investment with his victims which turned out to be fake.

“One of the count reads: ‘That you Ginika Obi James, Kingsåey Ibe Francis, Amaka Janet Okafor, Lokwutor Tina and Praise Ochei, sometimes in May, 2018, in Agbor within the jurisdiction of this honourable court did with intent to defraud conspired with yourselves to commit an offence to wit: obtain money by false pretences and thereby committed an offence contrary to Section a (1) (a) of the Advance Fee Fraud and other Fraud Related offences Act and punishable under Section 1(3) of the same Act.’

“The defendants pleaded not guilty to the charges when it was read to them.

“The prosecution counsel, Moses Arumemi, based on the plea entered by the defendants, prayed the court to fix a date for trial and to remand the defendants in prison custody.

“However, counsel for defendants, Eli Elugwu, told the court that he has filed an application for bail and prayed the court to grant bail to the defendants, arguing that the offence was a bailabåe one.

“After listening to the submissions of counsels, Justice Dimgba granted the defendants bail.

“The first defendant, Bishop Ginika Obi, was granted bail in the sum of N500,000 and one surety in like sum, and that the surety must be a civil servant of not less than grade level 10.”

“However, the four other defendants were granted bail in the sum of N200,000 and a surety in like sum. The surety must be a civil servant of not less than grade level 7.

“Justice Dimgba adjourned the case till May 7, 2019 for commencement of trial and ordered that the defendants should be remanded in prison custody pending the perfection of their bail condition.”