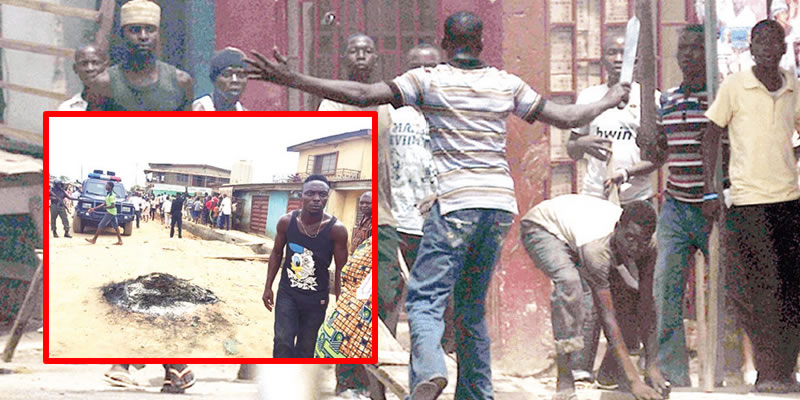 Two persons were feared dead on Thursday while many others were injured as hoodlums clashed in Oto Awori, Ijanikin, Lagos.

It was gathered that the violent clash, which started around 1 pm in the Lagos community and continued until about 5 pm, was between loyalists of the All Progressives Congress (APC) State House of Assembly Candidate for Ojo Constituency II, Alhaji Suleiman Raji a.k.a. Jafo and those of former Chairman Oto Awori Local Council Development Area (LCDA), Kayode Robert a.k.a. Bibire.

It was gathered that the hoodlums vandalised no fewer than 35 vehicles and looted shops while they blocked the expressway for several hours.

Already, armed policemen and soldiers have been deployed to the community to prevent any reprisals, while the two traditional rulers-Oni Ijanikin and Oloto of Oto-have addressed the parties and other subjects on the need for a violence-free election.

According to residents, trouble started after Raji, who doubles as Chairman ANACOWA Motorcycle Owners and Riders Association, an affiliate of Road Transport Employers Association of Nigeria (RTEAN), led his supporters to campaign at Oto Owori.

It was gathered that Raji’s campaign train, which had hundreds of motorcyclists from Ojo, had gone to the palace of the Oni Ijanikin and from there went to pay homage to the Oloto of Oto.

They were however shut out of the palace by angry supporters of Robert, who felt that their godfather and son was denied a chance at the Lagos House of Assembly because of Raji and had earlier warned that the candidate should not come to the community to campaign.

A mechanic, Taiye Akanbi, said that the youths’ action was followed by sporadic gunshots from thugs on the entourage of the candidate, which was reciprocated by those loyal to the former LCDA chairman.

“What followed were gunshots fired by those on the campaign train of Jafo. Bibire’s boys returned the fire. The first person that was killed was matcheted by Jafo’s boys,” he said.

Another resident, Sesan Adedayo, alleged that a young man was beaten to death, adding that those injured were rushed to a hospital at Cele Bus Stop, Ijanikin.

He said the campaigners imported motorcyclists and hoodlums from Ojo to cause mayhem, adding that they were armed with cutlasses, broken bottles and knives which they used freely.

Condemning the incident, the Oloto of Oto, Oba Josiah Olarewaju Ilemobade, said he was still shocked by the show of power exhibited by the hoodlums.

Ilemobade, who spoke through the Balogun of Ato Awori, Chief Rufus Fatogun, accused Jafo of failing to call his supporters to order despite being a palace chief.

He said Jafo’s action appeared premeditated, going by the hoodlums on his train and the arms they carried.

“His boys damaged well over 35 vehicles, including three parked in front of the palace. One person was severely injured but, thank God, no one died in the fracas.

“It was not a campaign, because no party leader was among those who came; only members of Okada Riders and Owners Association.

“He did the same thing during the primary election last year. He brought his boys to beat up party delegates, and that was how he emerged the party’s candidate.

READ  4 Arrested By EFCC Over Obasanjo’s $16b Power Projects

“With the election barely 24 hours away, he has come to destroy the work our youths have done for APC.

“The Oba went round in the morning to appeal to the youths not to allow the incident dampen their morale.

“The police did not help matters at all. It took them over an hour to get to the palace which is less than five minutes away from the station.

“And when they eventually arrived, they started firing indiscriminately.

“It was soldiers that brought normalcy to the area,” he said.