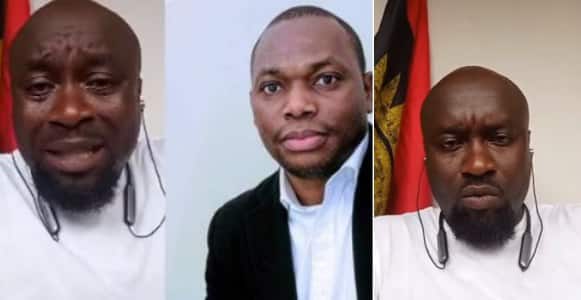 The Lagos state police command have launched an investigation into a vile video by a yet-to-be identified Igbo man threatening to kill one Adeyinka Grandson, the campaigner for the creation of Oduduwa republic.

Recall that after the election, there were reports that some thugs in Lagos state attacked the shops of some Igbo men and women for allegedly not voting APC during the elections. The Lagos state police command have however denied this claim.

It is alleged that Adeyinka Grandson said some uncomplimentary things about Ibos residing in Lagos after the election and this caused the Biafran man to reply him with threats.

The Biafra member vowed to haunt Adeyinka Grandson and kill him if anything happens to any Igbo man and woman or their businesses. He threatened that the secessionist group would burn down Lagos if they destroy any property of any Igbo man. He argued that Igbos should be allowed to vote freely if they reside and pay their taxes in Lagos.

Reacting to the threats, the Lagos state police spokesman, Chike Oti, in an interview with The Nation, said the state commissioner of police, Zubairu Muazu, has already directed the intelligence arm of the command to probe the video with a view to obtain credible intelligence that will lead to the arrest and prosecution of the character.

“The command has seen the video. The man in question is automatically a suspect as far as the Lagos Police Command is concerned. Actually, we do not know where he made that video from. We are yet to establish if it was in Nigeria or abroad but investigation will reveal that.

READ  Court Strikes Out FG’s Appeal Against Justice Ademola, Others

“The Police Commissioner Zubairu Muazu has urged residents to disregard such characters because they are out to cause only mischief. Nigerians are enjoined to take news emanating from questionable sources with a pinch of salt and try to get confirmation on issues of security from the police and relevant agencies. The police commissioner reassures the good people of Lagos that their security is uppermost in the mind of the command. The command will leave no stone unturned to ensure security for all to thrive, irrespective of tribe, religious or ethnic inclination.

“He is appealing to Lagosians with useful information on the character and his ilks to avail the command. The Commissioner has activated intelligence component of the command to look into the video footage and avail us credible intelligence that would lead to the arrest of that character and people like him who are agents of division and propagate hate, inciting messages.

“From available record, the man in the video is not a member of any known Igbo organisation and has never been introduced as spokesman for any known Igbo group. So, the Igbo and Nigerians in general should not take him seriously.” he said Watch the controversial video below