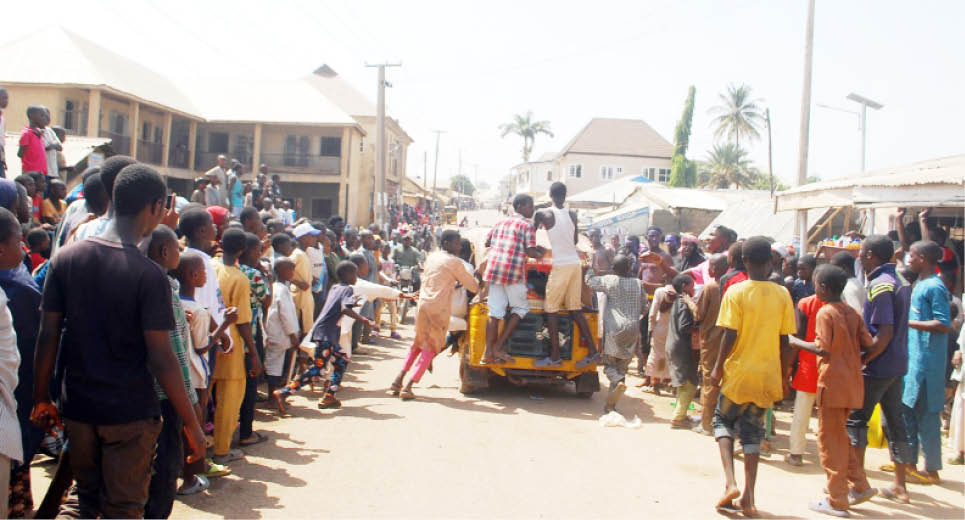 The youths who took up sticks, brooms and cutlasses blocked entry and exit points into the city.

They formed a human blockade at Masaka on the Abuja-Keffi expressway, impeding traffic flow. A suimilar occurrence took place at City Gate on Airport Road and AYA-Zuba expressway at Dutsen Alhaji Junction.

On Wednesday, INEC declared Buhari, the candidate of the All Progressives Congress (APC) winner of the polls after he polled 15,191,847 votes to defeat Atiku of the Peoples Democratic Party (PDP) who had 11,262,978 votes.

City News reports that a large number of the celebrating youth, who were mostly minors, swarmed the lane leading into Abuja from Keffi, chanting ‘sai baba’ as they forced motorists to do same.

The bonnets and windshields of some motorists’ vehicles that did not chant ‘sai baba’ and did not make the NextLevel gesture by raising four fingers were smashed.

The chaos continued down to the Maraba market as they pulled down campaign billboards of opposition candidates and set them ablaze.

In some instances, they sat on some vehicles’ bonnets for minutes, dancing and chanting ‘sai baba’ while they brandished brooms, the APC symbol.

They also handed motorists brooms as permit and those who refused to collect were harassed and delayed passage.

Commercial tricycle and motorcycle riders also joined in the wild celebration, as they drove recklessly, performing stunts on the Airport Road, Obafemi Awolowo Way along Jabi-Berger roundabout, Abuja-Keffi Road and several other locations in the FCT.

READ  Ekweremadu returns to Nigeria after IPOB assault in Germany

They rode to places where they had been banned by authorities from accessing as other residents moved about cautiously and in fear.

A motorist, John Yahaya, said Buhari’s supporters were free to celebrate but harassing other citizens who were going about their legitimate businesses was not acceptable.

He said their action was provocative but thanked God that nobody confronted them as any altercation could result in violence.

Attempts to reach the FCT Police command spokesman, DSP Anjuguri Manzah, proved abortive as he did not pick calls or reply to a text message sent to his mobile phone number.