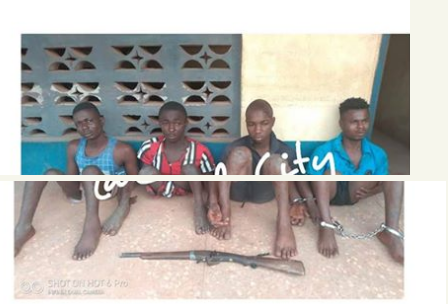 The Enugu State command of the Nigeria police Force through its operatives of Emene Division on Saturday nabbed a four man gang of suspected cultists/Armed Robbers who have been blacklisted by the operatives over their nefarious activities in the state.

The bandits allegedly robbed him of his handset and one hundred , ten thousands m naira, leaving him with injuries.

The suspects were also caught with single barrel locally made gun.

However, the suspects are currently helping the police with investigations as they have revealed other involvements in their inhumane activities.