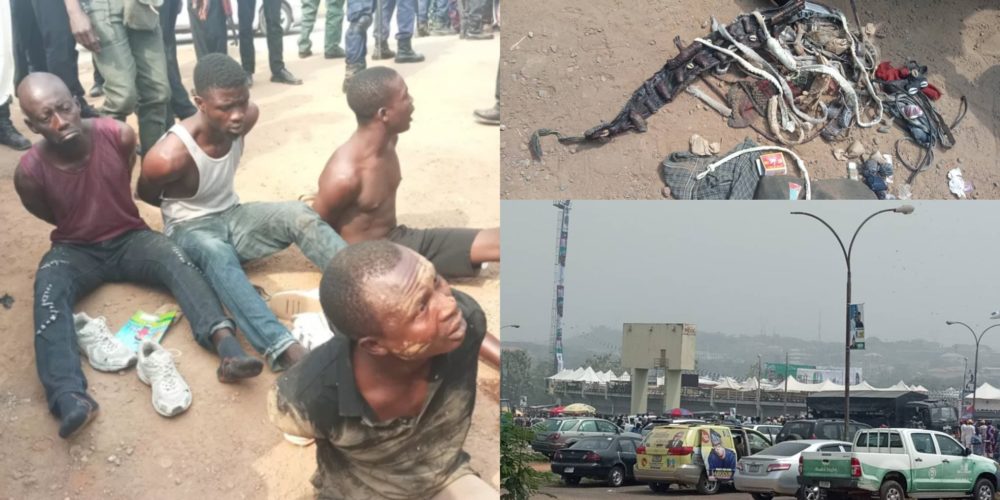 Pandemonium broke out on Monday at the venue of the presidential campaign rally of the All Progressives Congress (APC) in Ogun State following the arrest of some suspected thugs who engaged themselves in a bloody clash.

The rally was held at the Moshood Abiola International Stadium in Abeokuta, the state capital.

The face-off between suspected thugs came as thousands of APC supporters and those of the Allied Peoples Movement (APM) arrived at the venue.

Allies of the state governor, Ibikunle Amosun, who were denied tickets by the APC are running on the tickets of the APM and are being backed by the governor who himself is a senatorial candidate of the APC.

Both parties are, however, backing Mr Buhari for reelection.

The clash started as thousands of party faithful awaited the arrival of President Muhammed Buhari and other leaders of the APC who attending another rally in Ilorin, Kwara State.

The police arrested some of the suspected thugs with dangerous weapons, including axes, charms and guns.

Some journalists were also caught in the fracas as it spread outside the stadium. The publisher of News Direct newspaper, Samuel Ibiyemi, said he narrowly escaped death.

Narrating his ordeal, Mr Ibiyemi said he lost a wristwatch and other valuables to the thugs. He said the thugs also seized and tore copies of the publications he brought to the venue.

The spokesperson of the state police command, Abimbola Oyeyemi, could not be reached at the time of this report.