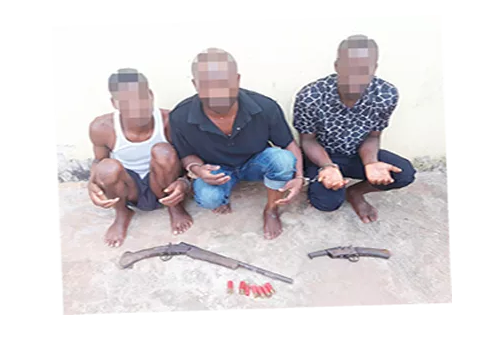 A 37-year-old suspect who was an inmate in a prison in Delta state, has been rearrested for armed robbery. According to the suspect, Rome, when he was first arrested and jailed, he was actually a victim of circumstances.

He explained that he was at a friend’s house, when policemen barged into the apartment and arrested his friend for car snatching. He was also arrested. No matter how hard he tried to tell the police that he had never stolen in his life, let alone snatch a car, the police refused to believe his story. When he was taken to prison, he went into a whole new world, where he met different people and criminals.

One of the inmates he befriended, later initiated him into robbery. Presently, Rome has been arrested for the second time. And this time, without mincing words, he admitted that he participated in the robbery operation. But the downhill story of his life started in prison. Police said that Rome was arrested for allegedly being part of a robbery gang that had been terrorising Ughelli, Patani and Warri areas of Delta State.

The suspect after his arrest claimed to be a first time robber, but operatives of the Special Intelligence Response Team, (IRT), who arrested him refused to buy his story.

The police alleged that Rome and his partners in crime had carried out a series of robberies and kidnappings across Delta State. Rome was arrested by the IRT operatives in Ugor Community in Ughelli South Local Government Area of Delta State alongside two other members of his gang, Saturday Isegini (36) and Oke David. Recovered from them were two locally made short guns, seven live cartridges and a Volkswagen Golf 3 car.

I was arrested in my first operation, we robbed victims of Volkswagen Golf 3 car, N500, 000 and mobile phones.” A police source said that: “Rome and his members were not first time offenders as they claimed. Rome and members of his gang are on the Wanted List of Delta State Police Command and the Department of State Security, (DSS), following their heinous criminal activities.

The intelligence, which led to their arrest was generated by the office of the Inspector General of Police, Mohammed Adamu (IGP), and passed on to IRT. A crack team of operatives were deployed to Delta State to trail and arrest members of the gang.” The source further stated: “The gang was into robbery and kidnapping. They have been terrorising Ughelli, Patani, Warri and Sapele areas of Delta State. They are involved in a series of robberies and kidnappings. They are not first offenders and some members are still in prison.

They are among criminals that are on Police Wanted List for kidnapping and robbery. We caught them while they were planning another robbery operation. We tracked and arrested them after they had successfully robbed a man of his Golf 3 Wagon car. They also robbed a lady of cash and other valuables. They took the Golf car to Kokori, where it was hidden with the intention of using it for operation the following day.

Unfortunately for them, they were intercepted.” Remembering his first arrest and journey to prison, Rome, who has a fouryear- old son, said: “I used to work with a security company. Our company got a security contract with Intel Logistics Port Harcourt, where I was deployed. I worked here for five years.

I was earning N32, 000 monthly. I was sacked in December 2012. I was sacked after I lost my dad; I took permission to attend my father’s burial. I stayed longer than I should and then I was sacked.” Rome said that after he was sacked, he returned home and soon got bored and frustrated with being jobless. He then decided to visit one of his friends. He recounted: “While I was in his apartment, some people brought a vehicle. A few minutes after they left, police came to arrest us.

We were charged to court as car snatchers. While I was in Warri Prison, I became friends with Eseletu. I don’t know what brought him to prison but we became friends. I spent eight months in prison and when I was leaving, I gave him my contact.” When Eseletu came out, he phoned Rome and asked him to meet him in Warri. Eseletu wanted Rome to join him in robbery. “When I returned home, my aunt, whom I was staying with said that I had started moving with bad company. She told me not to get myself into trouble again. She said that she found it difficult to visit me while I was in prison.”Moments after the conversation with his aunt, Eseletu called. He asked Rome to come to Ughelli. When Rome got there, Eseletu introduced him to Saturday Isegini and Oke David.

He told Rome that they were his gang members. Rome said: “Eseletu brought two locally made guns and said that we would stop at Agbara junction. He said that we would pretend we were heading to Warri. Eseletu flagged down a vehicle; when it stopped, we entered with a bag containing our guns.

A woman passenger entered the vehicle and when the driver had driven to a certain point, we robbed the woman. We also snatched the vehicle from the driver. Eseletu took the vehicle to his uncle’s house in Kokori, where we slept. We all agreed that we were going to use the car for robbery the next day. We had planned to rob a supermarket, but Oke was arrested. He led the police to arrest Saturday and I. After our arrest, we took the police to Kokori where the vehicle was recovered. But Eseletu escaped because his people informed him that police were looking for him.” Isegini, a primary four dropout and a cab driver, said that his role in the gang was that of a driver. He explained that the leader of the gang, Eseletu, invited him to join the gang when he was trying to raise money to buy a car for commercial purposes. His words: “I’m a cab driver; I operate along Ughelli to Bayelsa State. I make close o N8 000 daily. My vehicle, however, developed a fault and the owner said he didn’t have money to fix it.

I parked it and went into a ghetto along Patani Road where they sell Indian hemp. Each time I went there, I would see Eseletu throwing money around. He used to buy India hemp for me. Not long ago, he asked me what I did for a living, I told him I was a cab driver, but was out of job because my car was faulty and I had no money to fix it. “And then he asked me to join his gang. He said I would make quick money and soon purchase a car. I participated in one of their operations; we snatched a car from a man. I was the person who drove the vehicle to Eseletu’s uncle’s house in Kokori. We were planning to use the car for another robbery operation when police arrested me. I regretted getting involved in crime; I hope the police will show mercy on me.”