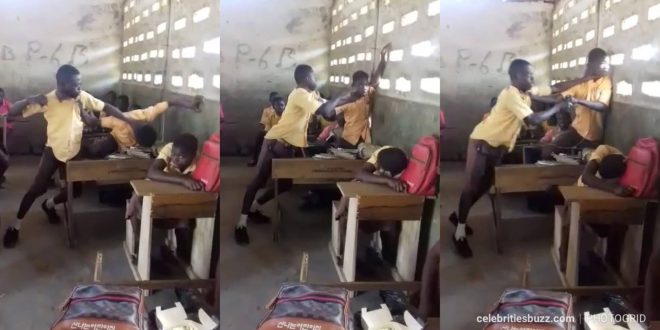 Two pupils were left to fight in front of their classmates and teacher who purportedly filmed the shocking incident which happened recently in Ghana. It is believed that the very person who filmed the incident was the Class Teacher since pupils are not allowed to use phones in school.

It is claimed that the unnamed teacher left the pupils to fight since the Ghana Education Service (GES) banned caning in schools.

The GES in a statement signed by the Deputy Director General, Anthony Boateng, ordered all schools to immediately adopt a new disciplinary toolkit together with alternative sanctions as measures for correcting pupils and students in schools.

Some of the lasting effects of this method of disciplining school children include physical scars, emotional scars (trauma, fear, timidity etc.) and violent behavior.”