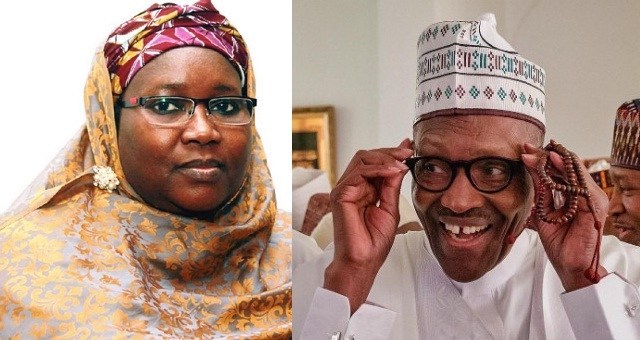 A storm of mixed reactions by Nigerians has greeted the appointment Amina Zakari as the head of the collation centre of the forthcoming general elections by the Independent and National Electoral Commission (INEC).

Concise News had reported earlier that INEC Chairman, Mahmood Yakubu, appointed Zakari, a national commissioner at the commission to head the collation centre of the elections.

INEC chairman, Mahmood Yakubu, who spoke during the inauguration, said the committee shall be responsible for the national collation centre – the International Conference Centre – from where results of the Presidential election will be announced.

“It will serve as the secretariat for collation of results and venue for briefing of international observers and the media,” Yakubu said.

Moments after the news broke, Nigerians took to the micro-blogging site, Twitter to air their opinions on Zakari’s appointment.

This is a blatant illegality Distinguished, the Chief Returning Officer is the Chairman & this CANNOT be DELEGATED. All well meaning citizens MUST rise against this. #ElectionFraud

@GovAyoFayose
Instead of INEC appointing, Amina Zakari, a blood relation (niece) of President Buhari, as the Chairperson of INEC Advisory Committee and Presidential election Collation Center Committee, why not just appoint one of the President’s children as INEC Chairman?

Reno Omokri@renoomokri
How can @INECNigeria appoint Amina Zakari, President @MBuhari’s blood niece, as head of its collation centre for the 2019 elections? Even the late Idi Amin would not do this! This makes mockery of Buhari’s promise of a free and fair election #RenosDarts https://www.thecable.ng/inec-picks-amina-zakari-as-head-collation-centre-for-elections/amp …

INEC appoints Amina Zakari as head of collation centre for elections – TheCable
Amina Zakari, a national commissioner with the Independent and National Electoral Commission (INEC), has been appointed to head the

Femi Fani-Kayode@realFFK
Amina Zakari,Buhari’s neice and a member of his staff when he was Chairman of PTF has been appointed Chairperson of the INEC Advisory Committee & Pres. Election Collation Center Committee. Do you still believe that there will be a free and fair election in Nigeria on Feb. 16th?

Oby Ezekwesili@obyezeks
It is now quite obvious that the @inecnigeria Chairman is making decisions that cannot at all be INDEPENDENT. How in the world can@inecnigeria Amina Zakari – niece of @MBuhari – as its Head of Collation Center? Are the INEC Chairman &President ready for the grave consequence?

This is unprecedented, unrivaled and must be the 8th wonder of the world

Amina Zakari must not be an assistant referee with her uncle @MBuhari on the pitch@UNhttps://www.premiumtimesng.com/news/top-news/303981-2019-inec-appoints-controversial-official-zakari-head-key-election-committee.html …

2019: INEC appoints controversial official, Zakari, head key election committee – Premium Times…
The independent National Electoral Commission (INEC) has appointed Amina Zakari, a controversial national commissioner who once headed the agency on an interim basis, as the head of its Collation…

Agbo Emmanuel, MFR@DrAgboEmmanuel
There is no better way for INEC to insult Nigerians than to boldly appoint Buhari’s niece, Amina Zakari, as head of collation centre for 2019 elections. They want to rig in with no remorse and regard for the will of Nigerians.

Buhari is here to end this democratic dispensation.

Great Oracle@AbdulMahmud01
No cause for alarm over Amina Zakari. She will be in-charge of the administration of the national collation center, not collation of votes.

Onye Nkuzi@cchukudebelu
· 15h
The IGP, Ibrahim Idris is due to retire this month.

He has had a controversial term in office – marked by insecurity and a lack of competence, but it appears he will be kept in office (just like Buhari has kept incompetent ministers in office)https://www.vanguardngr.com/2019/01/anxiety-in-police-as-igp-idris-tenure-ends-today/ …

Anxiety in Police as IGP Idris’ tenure ends today – Vanguard News Nigeria
There is anxiety in the Nigeria Police over what could happen in the next 24 hours, as the service term of the Inspector General of Police, IGP Ibrahim Idris, ends today

Onye Nkuzi@cchukudebelu
Not only this, but Amina Zakari (who is related to Buhari) was appointed by INEC as the head of the collation center for the upcoming presidential elections.

This does not pass the smell test: https://www.thecable.ng/inec-picks-amina-zakari-as-head-collation-centre-for-elections …

INEC appoints Amina Zakari as head of collation centre for elections – TheCable
Amina Zakari, a national commissioner with the Independent and National Electoral Commission (INEC), has been appointed to head the

Remi@Ceorhemz
INEC has appointed Buhari’s sister Amina Zakari as the head of the newly constituted national collation committee. I’m sure INEC is set to conduct a free & fair election

Jackson Ude@jacksonpbn
Buhari’s sister in INEC, Amina Zakari, who was removed as Director of Operations and moved to Health & Welfare, has now been made Director, National Collation, after she cried to Buhari. What this means is that Mrs Zakari is responsible for announcing Presidential election result

Logic-NG@LogicNigeria
Rigging Extravaganza! @inecnigeria in partnership with APC appointed Amina Zakari, a blood relation (niece) of @MBuhari as Head of Collation Centre for the 2019 Elections, this is coming on same day the IGP who should be handing-over to a new IG got a diplomatic tenure extension

They Are Perfecting Their Gameplan

Remi@Ceorhemz
· 19h
INEC has appointed Buhari’s sister Amina Zakari as the head of the newly constituted national collation committee. I’m sure INEC is set to conduct a free & fair election

Remi@Ceorhemz
Apart from Amina Zakari’s close family ties with Buhari, the new head of INEC collation committee along with el Rufai was part of the Afri-Projects Consult, which carried out contracts for the (PTF) which Buhari headed under Abacha. Keep expecting a Free & Fair election

afrispheric@afrispheric
Dear @inecnigeria Amina Zakari, the woman you just appointed as head of collation center for the forthcoming election is @MBuhari ‘s close blood relation, a fact of which you surely must be aware of.

The implications is Buhari is an umpire in game of which he is a participant.

Charles Ingreen@AkaliCharles3
If @inecnigeria have the mind to appoint Amina Zakari @MBuhari niece as the result collection officer, if it is good, it is then pertinent for @bukolasaraki to override Buhari on the electoral bill he has refused to sign into law. We must save Nigeria else our children will cry.

Hussein Afolabi@HusseinAfolabi
The appntmnt of Amina Zakari, a relative of @Mbuhari as one of d umpires in the #2019elections specifically in charge of announcing the results, is a sign that @Mbuhari & @APCNigeria are feeling the heat of the @atiku campaign and are gradually preparing their plan B, Rigging!

This is a blatant illegality Distinguished, the Chief Returning Officer is the Chairman & this CANNOT be DELEGATED. All well meaning citizens MUST rise against this. #ElectionFraud

SEGA L’éveilleur®@segalink
I believe it is only fair for the @inecnigeria Chairman to tender his resignation if he has finally decided to hand over and cede his duties to a member of GMB’s family (Niece – Amina Zakari). @CatrionaLaing1 @PaulTArkwright @OfficialPDPNig #ElectoralAmendmentAct2010 @CNNAfrica pic.twitter.com/C9Dk8vCgTh

The Seeker: Clearly, the forthcoming election is going to be a big sham, unparalleled by any before it in Nigeria.

Out of 12 commissioners, the only one with blood ties to Buhari was made head#Judas revealed

John Danfulani@john_danfulani
I alerted the nation on Buhari’s determination to replay Ivory Coast’s Laurent Gbagbo script in 2019. Hope INEC’s appointment of his blood relation & a serial mandate usurper Mrs.Amina Zakari has laid to rest all doubts on my prediction.

She is not related in any way to @NGRPresident, @MBuhari. Just make that phone call and concede defeat before #FeBuhari 16.

Maxwell@maxdistinguish
Buhari’s Sister, Amina Zakari Has Been Announced As The INEC Chief Collation Officer For the 2019 Presidential election.

Amina Zakarai who was alleged to be responsible for the falsification of election results in Edo, Ondo, Ekiti, Osun and all the bye-election

Kindly-Follow-Back@Naijadailyfeed
The Tyrant’s rigging machinery is nearly perfected. Inec just appointed Amina Zakari, Buhari’s niece as the head of presidential election collation center. There is no way this woman wont manipulate result in favour of her tyrant uncle. Rigging is loading

BOLANLE. C. Esq. @bolanle_cole
Nemo judex in causa sua “no-one should be a judge in his own case.”

Benny Umoren@BennyUmoren
Noticed how @MBuhari is not campaigning? It’s bcos thier rigging plans are solid and today they unveiled one of them by making his niece,Amina Zakari the head of Collation Committee in 2019 Presidential elections. @inecnigeria is not even hiding their rigging strategy anymore

African Giant – Ladi@LadiSpeaks
APC did all they could to slander Atiku, it didn’t work

Now they are so desperate that they have appointed Amina Zakari to head collation so she can easily change results! So much for integrity

Farooq Kperogi, Ph.D@farooqkperogi
Don’t know if there’s literal truth to d notion that Amina Zakari is the daughter of Buhari’s sister, but neither PMB nor Amina has refuted this– to my knowledge. But given that INEC chair Yakubu was recently invited to the Villa by Abba Kyari, this looks like desperation to rig

ATIKU 2019@PDP_2019
Buhari’s sister in INEC, Amina Zakari, who was removed as Director of Operations and moved to Health & Welfare, has now been made Director, National Collation, after she cried to Buhari. What this means is that Mrs Zakari is responsible for announcing Presidential election result