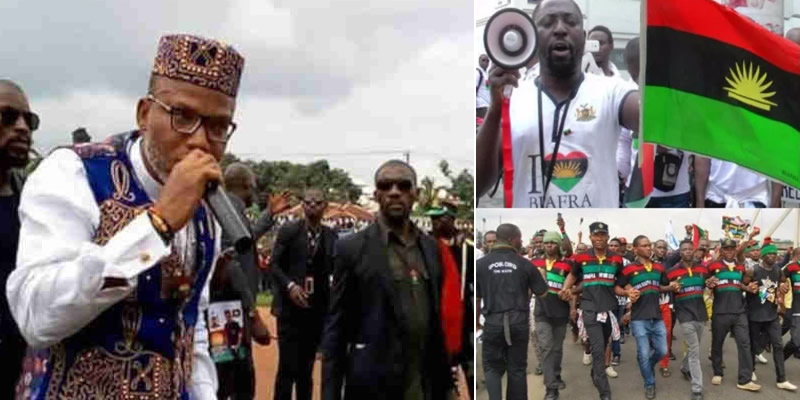 Leader of the Indigenous People of Biafra (IPOB), Mazi Nnamdi Kanu, has said only the conduct of a referendum on self determination in the Southeast, South-South, and some parts of the North central regions can halt Nigeria’s slide into another ‘civil war’.

Kanu, who stated this in a statement on Wednesday made available to journalists by IPOB spokesman, Comrade Emma Powerful, took a swipe at the proponents of restructuring and true federalism.

He said restructuring of Nigeria had defied any sensible definition, adding that true federalism is unworkable in the country because one-third of the states in the federation as presently constituted have Sharia as state religion and code of justice, which denies non-adherents of that Islamic religion certain freedoms guaranteed by the Nigerian Constitution.

The IPOB leader said: “We, the Indigenous People of Biafra have proposed and still proposing the only idea that would halt Nigeria’s spiral towards bloody implosion. Our prescription is clear: Conduct A Referendum On Self-Determination for Biafrans; and indeed any other organized and cohesive group that demands it. That is the only fair way; not “True Federalism” or “Restructuring”.

“To drive home our demand, IPOB will ensure that the entire land of Biafra is paralysed on whatever date they choose to hold the presidential elections. This position is irreversible unless our simple demand is met.

“While others are busy pontificating on newspaper pages or selling their soul to the highest bidder in Abuja, we remain on this long walk to a free Biafra, where black people in sub-Saharan Africa will for the first time since colonialism, live under guaranteed freedoms and rights unlike the primitive arrangement people are forced to live under in Nigeria. We won’t get there overnight.

“But in this 2019, we will make some of our most significant strides yet to accomplish our stated mission which is to restore Biafra. We must always be guided by the reasoning that underpins our belief that Nigeria as presently constituted in unworkable.

“By virtue of their orientation and heritage, the dominant ruling Arewa Northern Nigeria, with their feudal societal structure, is not designed to understand or practice democracy. This is one of the greatest mistakes early thinkers like Dr Nnamdi Azikiwe made. The social arrangement they have in Northern Nigeria makes it impossible for their leaders that are thrust upon the people in Nigeria to appreciate and respect democratic values such as respect for the rule of law, freedoms and liberty. These noble ideals of democracy are incompatible with Sharia.

“True Federalism” particularly is evidently unrealistic in a country where twelve states have already adopted Sharia as state religion and code of justice, which denies non-adherents of that religion certain freedoms guaranteed by the military-imposed Nigerian Constitution. Conversely, Restructuring has defied every sensible definition.

Come to think of it, was it not a federal arrangement or True Federation that Nigeria had at independence but which could not survive more than six years? What then is this new true Federalism or Restructuring that will suddenly become workable when it had failed in the past and even led to a war of attrition?

I have nothing against those wishing to live under the Fulanised British colonial contraption called Nigeria as most Yoruba and Hausa people do.

“What we resent is the inability or the unreasonableness of the chattering class in Nigeria to come to terms the inescapable realization that no country with a myriad of divergent value systems can peacefully exist as a nation state. This is elementary political philosophy.

“Meaningful human development in Nigeria is impossible because the Fulani feudal mindset, Yoruba monarchical system and the republican disposition of Biafrans are forever irreconcilable value systems that will ensure the unworkability of Nigeria as a country.”