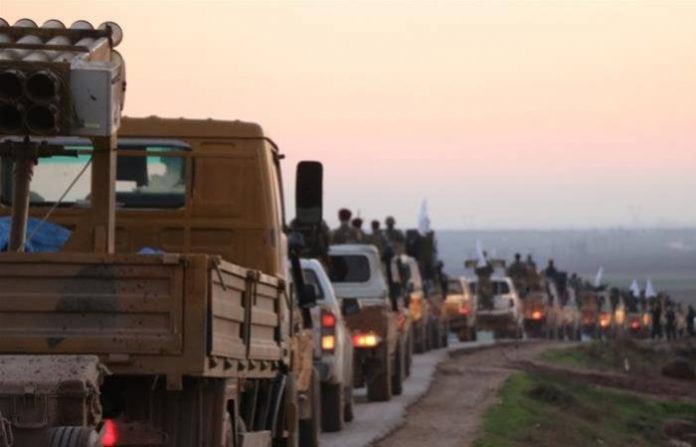 Trucks carrying regime forces and equipment, two tanks, and other armoured vehicles have arrived in the village of Arimah in the western countryside of Manbij, sources told Anadolu Agency on Tuesday. Arimah is 25km away from the centre of Manbij.

The development comes a day after Turkish-backed Syrian fighters dispatched fighters and armoured vehicles to the front line along Manbij and days after Washington took an unexpected decision to withdraw troops from Syria.

Manbij is controlled by the Syrian Democratic Forces (SDF), led by the Kurdish People’s Protection Units (YPG), seen as a “terrorist” group by Turkey.

Ankara says a Turkish operation in Syria will target areas under the control of YPG fighters, including Manbij.

Turkish Foreign Minister Mevlut Cavusoglu said on Tuesday that Ankara and Washington agreed to complete withdrawal of the YPG forces from Manbij before US pulls out of Syria.

Turkey has sent reinforcements at the border with Syria in the previous days, with local media reporting that some vehicles had crossed it.

In the past two years, Turkey has conducted two offensives into northern Syria, dubbed “Euphrates Shield” and “Olive Branch”.

President Donald Trump’s surprise decision to withdraw the estimated 2,000 US troops from Syria on Wednesday has created shock among members of the Congress, including Republicans, as well as among Washington’s Western allies.

Erdogan’s spokesperson said on Monday that US military officials will come to Turkey this week to discuss coordination on Syria.

Washington for years supported the YPG-led SDF in the fight against the Islamic State of Iraq and the Levant (ISIL, also known as ISIS) group in Syria.

A senior Syrian Kurdish official said they were reaching out for help to protect the Kurdish-administered areas against a possible Turkish offensive following the US withdrawal, adding that they were in talks with Russia, the Syrian government and European countries.

“We will deal with whoever can protect the good and stability of this country,” the Associated Press news agency quoted Ilham Ahmed as saying on Monday.

A delegation of the Syrian Democratic Council, the political wing of SDF, arrived in Russia last week for talks.

Ankara claims the YPG is an extension of the Kurdistan Workers’ Party (PKK), which has waged attacks on Turkish soil since the 1980s as they sought autonomy.