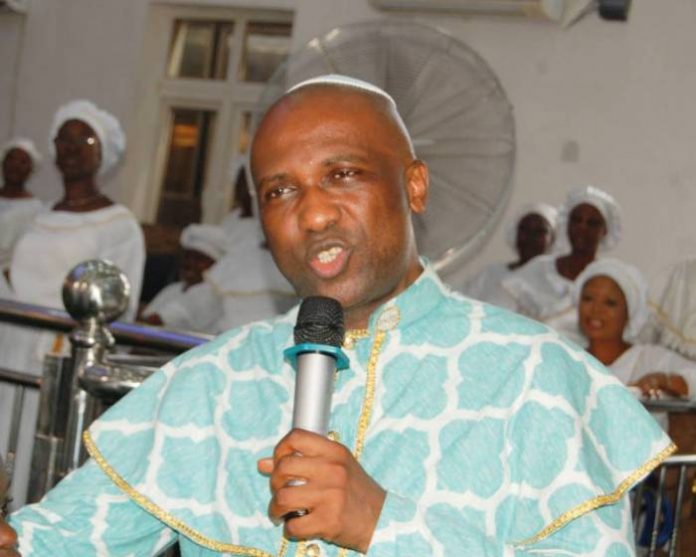 Primate Babatunde Ayodele Elijah of the Inri Evangelical Mission, has predicted that the boasts of the main opposition party, Peoples Democratic Party (PDP), notwithstanding, the ruling All Progressive Congress (APC), will still win the 2019 presidential polls in the country.

Elijah stated that indications emerging from the country’s political scene has not shown that both PDP presidential candidate, Atiku Abubakar, and his campaign boss, Senate President Bukola Saraki are serious with the ambition of their party to take over power from President Mohammadu Buhari come February, 2019.

According to him,: “On the 2019 election, it won’t be business as usual but APC will still win Lagos, Oyo, Kano, Kaduna and Kogi while Kwara still belongs to PDP.”

In a press release he made available to newsmen in Ado Ekiti, at the weekend, the cleric added that states that would give APC headaches include Lagos, Ogun, Imo, Edo, Kaduna, Sokoto, Rivers.

He needs to link up with with Saraki glory to win. Atiku and Saraki are still playing. I don’t see any seriousness from them yet. Nigeria will be at peace in 2019.

“No presidency for Tinubu. He should rule it out. PDP has no chance in Ogun. If care is not taken, Amosun candidate might win Ogun. APC will Anambra, Ebonyi, Cross River in Presidential election, ” he said.

On churches in Nigeria, Primate Elijah said, “Churches are making life difficult for their members especially the big churches. The big pastors and churches establish businesses that are more expensive than government owned. We celebrate and worship them more like Jesus. They have become demigod. It is time to change today’s church.

”Don’t address me as G.O or founder, Jesus is the founder. I’m just a servant working for God. I’m not a member of CAN or PFN because they are political associations.

Primate Elijah described the Christian Association of Nigeria (CAN), as unserious people, “they talk without action.”

The cleric said only elixir to Nigeria’s perennial leadership challenge is ”to break into smaller nations, regions. APC, PDP or any other party isn’t the solution. We are tired of ourselves. It is no longer possible for one man to rule over 180m Nigerians. We don’t have activist just those fighting for themselves. No infrastructure, economy and security.

“Terrorism has come to stay in Nigeria. The Joint Task Force (JTF) might turn into another terror group because government will no longer have time for them. And the JTF guys have received a lot of military training. Nepotism, tribalism and favoritism will make the military weaker .”

Predicting on oil and gas industry, he said there will be pipeline explosion, oil price will crash, there will be problem in OPEC leading to fuel scarcity, subsidy will cause more trouble because independent marketers, NUPENG and others will come together to face the government.

On world politics, the cleric said there may not be a second term for Donald Trump and predicted unstable economy inflation in the U.S, adding that Angela Markel may not have another term too.