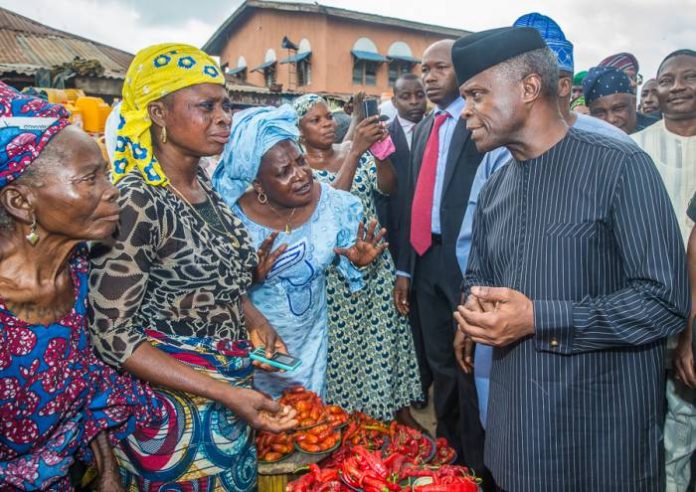 Vice President Yemi Osinbajo says the TraderMoni initiative under the Social Investment Programme was to uplift and boost the businesses of petty traders across the country.

The initiative, which was personally conceived by President Muhammadu Buhari, Osinbajo explained, was a micro-loan scheme under the Government Enterprise and Empowerment Programme (GEEP); it provides capital for artisans and petty traders.

Osinbajo stated this after inspection of Command Centre, where Tradermoni was being monitored and tracked at Bank of Industry (BOI) in Abuja on Thursday.

“President Buhari was a chairman of a group known as Katsina Foundation; the foundation was doing this exactly by giving loan to small traders like people making Akara and other small trades.

“The foundation gave loan to a lot of traders and he felt this could be replicated on the national scale because of how it worked.

“I can tell you that in terms of originating the concept of this Tradermoni, it is from the president.

“He has done it before and he had seen it working; he replicated it at the national level and I am happy we are succeeding.”

The programme also provides loans for commercially active Nigerians typically unable to access loans by traditional lending institutions as they have no formal identities, financial track record or even collateral.

The vice president noted that BOI was brought in to give professional and commercial way of doing it.

He said that no fewer than 1.4 million people had so far benefitted from the programme across the country.

According to him, the programme is the largest in Africa and no country that has anything close to it in the world except India.

Osinbajo said that it was unfortunate and ridiculous that people were criticising a programme of this nature that had touched lives of a lot common man.

“It is a programme approved by the Senate and the entire National Assembly.

“I am wondering while an individual is condemning such project. We are only going out to implement it and we are doing so as vigorous as possible,” Osinbajo stated.