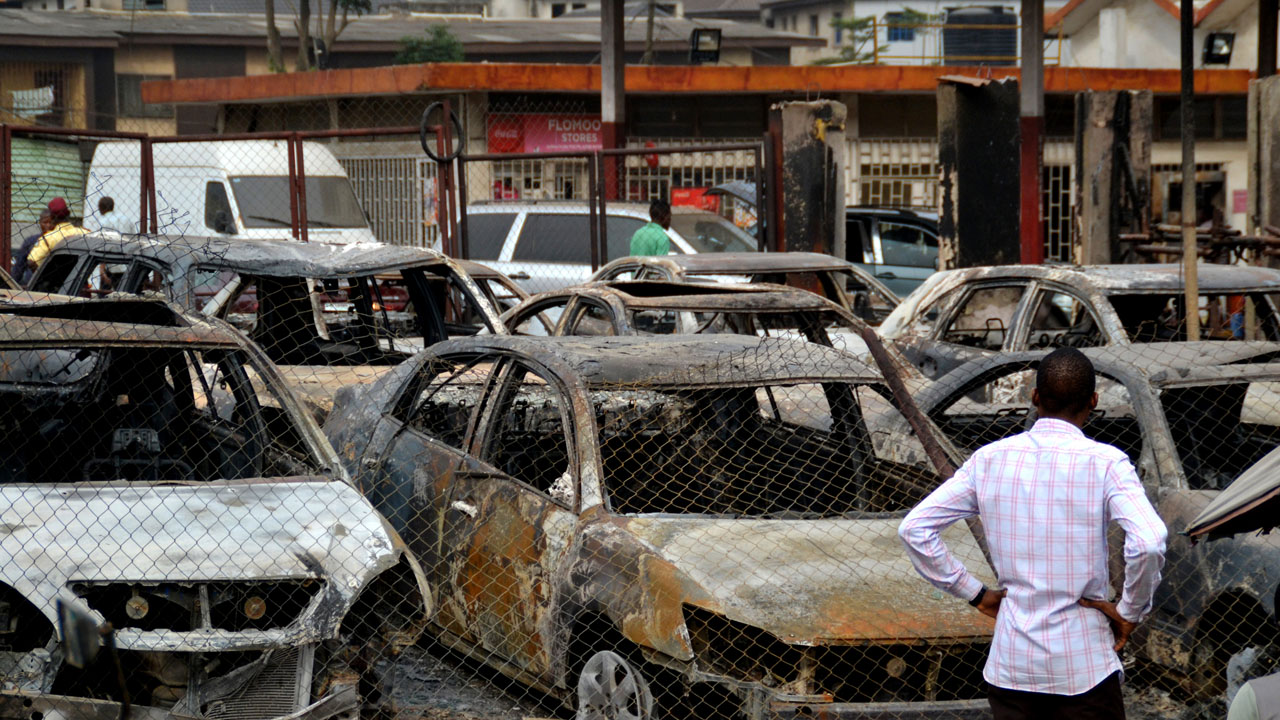 No one died in the inferno early Wednesday, but it was the latest to hit the Lagos neighbourhood of Abule-Egba, where poverty, shoddy infrastructure and oil theft proved a deadly mix in the past.

In December 2006, at least 280 were killed in a blast at a pipeline as people stealing petrol in the area accidently triggered an explosion.

While only a few people suffered burns in the latest fire, the circumstances were similar.

Sandra Showumni and her family opened their front door to see what was happening but the fire was fast approaching.

“We had to run to the backyard. We were climbing the wall, the fence, the roof,” the 48-year-old housewife told AFP.

“Some people from our compound were pregnant. My young children, aged 4 and 5, had cuts on their legs. We were fortunate.”

The gutters outside were soaked in oil flowing from a Nigerian National Petroleum Corporation (NNPC) pipeline running through the area.

“They then didn’t close it back properly so all the oil kept flowing,” Showumni said.

The gutters lead to an abattoir where butchers slaughter cows and goats, boiling meat and burning any excess.

It was there the blaze was sparked as unknowing butchers ignited the fire, decimating the community.

The destruction has left the community in anguish, with scores of homes and vehicles destroyed.

READ  UPDATED: US Says It Will No Longer Issue Visas For Birth Tourism

Showumni’s home, in the middle of her compound, was left blackened by the fire but still stands.

The homes closer to the street and the gutters were all destroyed.

The fire has been extinguished but smoke still rises from the bricks and rubble.

The stench of burnt petrol fills the air.

Adegoke Olubumni, a 65-year-old building contractor who has lived in the area for over 20 years, was counting the losses.

“Someone was selling cars, he had about 50 there. All his cars exploded,” Olubumni said.

The NNPC said it had shut down the pipeline for repairs, while blaming the incident on vandals and thieves.

Nigeria, Africa’s leading crude producer, accounts for an average of two million barrels per day, but it imports the bulk of its refined petroleum products for domestic use.

Its four refineries are not producing up to their installed capacity due to mismanagement, inefficiency and corruption.

Nigerians see cheap petrol as the only benefit they can get from an opaque system, where corruption linked to the country’s petroleum wealth is rife.

At Abule-Egba, between the shells of exploded vehicles, and many picking out their belongings from the wreckage, talk was turning to politics.

The local government is run by President Muhammadu Buhari’s ruling All Progressives Congress (APC) party, which the opposition is trying to oust from power in February elections.

Campaigning has started and the main opposition Peoples Democratic Party (PDP) tried to take advantage of the fire at Abule Egba to woo the voters.

PDP supporters chanted, handing out packs of bread to distraught residents and promising to help them rebuild their homes.

But many were pessimistic.

“Even if they win nothing will change,” said Christian Oriji, 33. “They are trying to capitalise on what happened but really the problems with development in Nigeria, all the politicians have a hand in it.”