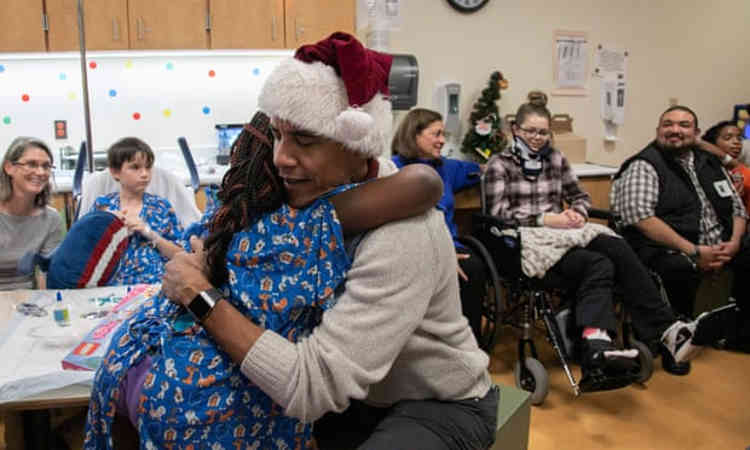 Barack Obama surprised patients when he delivered gifts at a children’s hospital in Washington on Wednesday.

The former president wore a Santa hat and carried a sack of presents over his shoulder as he surprised patients and their parents at the hospital, Children’s National Health System, in the north-east part of the capital. He greeted them with a “ho, ho, ho!” and told them his reindeer were “stuck in some snow”, but he wanted to make sure he visited.

Obama chatted with patients in their rooms and stopped by several playrooms. He also recorded a video message for those he couldn’t visit.

The hospital tweeted that Obama “warmed our hallways and put smiles on everyone’s faces!”

The tweet included a short video showing Obama leading staff and patients singing We Wish You a Merry Christmas. One girl gasped in surprise as Obama appeared around the door of her room and bent down to the bed to give her a hug.

Obama tweeted back: “Merry Christmas and happy holidays to the extraordinary kids, families, and staff at Children’s National. And thanks for humoring me as your stand-in Santa.”

Standing in one of the common areas of the hospital, Obama praised the staff’s work on behalf of the patients.

“You have the nurses, and staff and doctors and people who are caring for them and looking after them and just there for them, listening to them and holding their hands. That’s the most important thing there is, a great reminder of what the holiday spirit is supposed to be about,” he said.

The former president last visited the hospital in 2014.