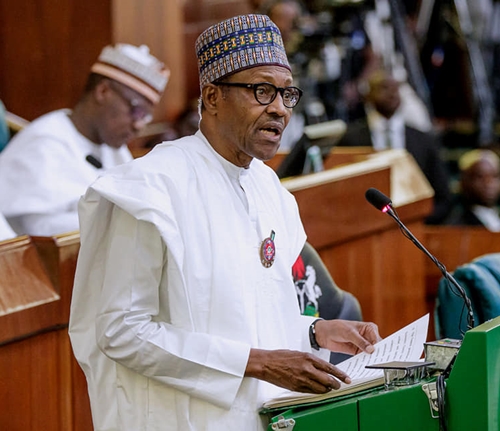 A breakdown and highlights of the 2019 national budget as presented by President Muhamamdu Buhari at a joint session of the National Assembly, has been made.

President Muhammadu Buhari presented the 2019 budget to a joint session of the national assembly in Abuja on Wednesday, despite initial challenges.

While presenting the budget, the president presented the progress his administration had made in the last three budgetary cycles, stating the recovery from recession, reduction in insecurity, and the war against corruption as the some of the rewards of those years.

He also gave the details of the 2019 fiscal year as outlined by the budget.

Below is the top seven highlights of the 2019 and what it means for Nigeria and Nigerians in the coming year:

As at 2pm on Wednesday, when the budget was being presented, Brent crude was trading at $57.20 per barrel — $2.80 below the benchmark. But the president said reputable analysts have said the prices will not continue on the downward trend in 2019.

If oil prices remain at current state or falls in 2019, the proposed budget will incure more deficit and debts for the country. For 2018 the benchmark was set at $51 per barrel. The average price of crude was higher through the first three quarters of the year.

The president said crude oil production has continued to increase within the country, stating that the Egina project will add 200,000 barrels to Nigeria’s production.

Therefore, for 2019 budget, the oil production benchmark was set at 2.3 million barrels per day, including condensate. This was the case for 2018, but up until Q3 2018, actual production has been 1.95m.

This also means a reduction in estimated revenues for 2019 budget.

According to the president, N4.04 trillion or 50.31 percent has been earmarked for recurrent expenditure

With addition N900 billion for recurrent expenditure, the budget reflects an increase in minimum wage as agreed by the federal government and labour congresses.

“Again we have included provisions for the implementation of a new national minimum wage. To avoid a system crisis on the Federal Government and states, it is important to device ways to ensure that its implementation does not lead to an increase in the level of borrowing,” Buhari said at the presentation.

“I am, accordingly, setting up a high powered technical committee to advice on ways of funding an increase in the minimum wage and attendant wage adjustments without having to resort to additional borrowing.”

According to the figures reeled out by the president, the amount to be spent on debt servicing for 2019 will outweigh what will be spent on capital projects.

The president estimates that N492.36 billion will be spent on statutory transfers, and N120 billion as sinking fund.

However, to keep inflation in check, this may be a good idea.

Inflation has declined from 18.2% in January to 11.28% in November, 2018, while foreign capital Influence has also improved, with foreign reserves peaking at over $44 billion in 2018.

The president, during his presentation, said inflaton rate is projected to fall as low as 9.98 percent in 2019 — despite the elections.
$1bn on fuel subsidy

For the first time in the life of his administration, President Muhammadu Buhari says the federal government is setting aside $1 billion for fuel subsidies.

“We have allowed N305 billion, equivalent to $1 billion for under-recoveries by NNPC on premium motor spirit in 2019,” Buhari said.

“We will continue working to bring it downwards, so that such resources are freed to meet the developmental needs of our people.”