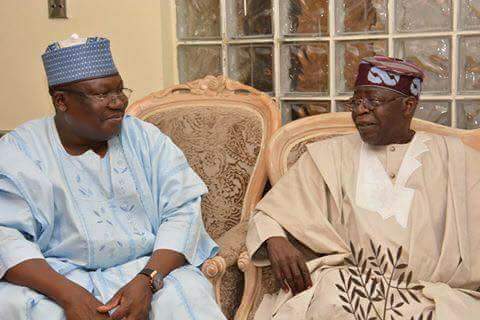 A high-ranking member of the ruling All Progressives Congress (APC) Bola Tinubu has lamented that political prostitutes and their robbers denied Ahmed Lawan senate presidency.

Lawan, who is currently the Majority Leader of the eighth senate, was the party’s choice for the position in June 2015.

But some federal lawmakers on the platform of the new ruling party at the time had other ideas as they were said to have truncated the move to ensure Bukola Saraki’s emergence as senate president.

The party was almost torn apart as a result of this.

Meanwhile, Saraki and his loyalists have since decamped to the main opposition Peoples Democratic Party (PDP).

And speaking on Saturday at the inaugural Abiola Ajimobi Roundtable organised as part of the activities marking the 69th birthday of the Oyo State Governor, Tinubu said he had no regret backing Lawan, who also attended the event, to become senate president.

He said: “Senator Lawan, thank you very much. You are a great example of a very consistent and intellectually resourceful leader that we have in this country. We saw in him, these leadership traits and the qualities we wanted in the senate president. We know you are qualified and competent to be, that you would have led the most important arm of our government more effectively but the political prostitutes and their robbers and their collaborators denied you of it because of selfishness and selfish aggrandisement.”