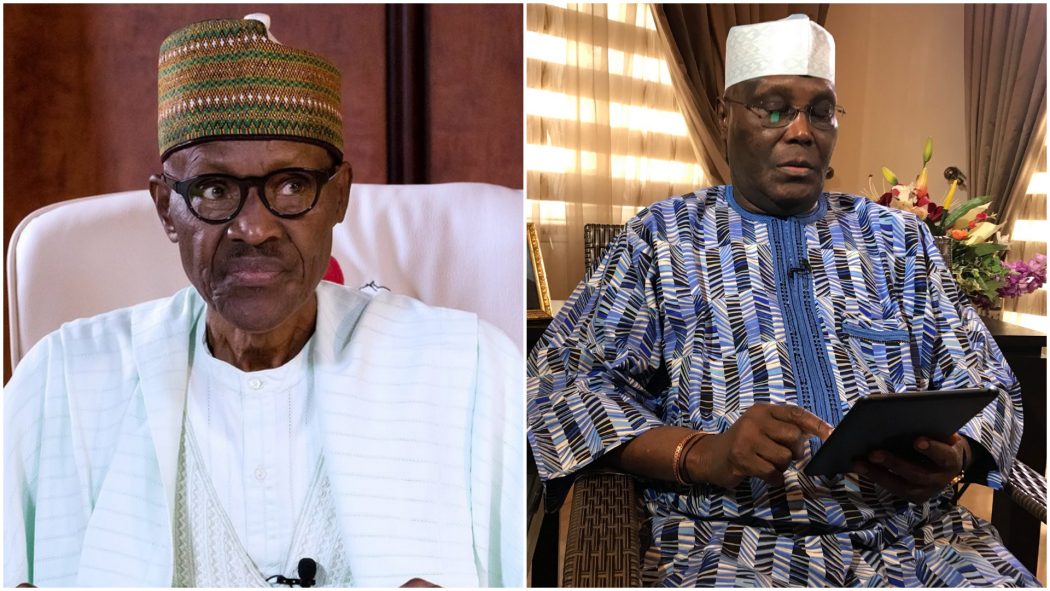 Barely two months to the February 16, 2019 presidential election, the political temperature in the northern part of the country has created a sharp division especially among the power brokers in the area. While many are directly or indirectly rootingfor the re-election ofPresident Muhammadu Buhari, others are canvassing for the opposition Peoples Democratic Party’s (PDP) candidate former Vice President Atiku Abubakar. AZA MSUE chronicles the emerging tough decisions of Northerners to choose between the two prominent Arewa sons for thenation’ s highest position next year.

The political game has begun as major presidential candidates, the incumbent President Muhammadu Buhari and of the All Progressives Congress (APC) and former Vice President Alhaji Atiku Abubakar of the Peoples Democratic Party(PDP), have commenced campaigns to seek for votes ahead of next year’s general elections.

Pundits are of the opinion that the presidential contest is a straight battle between President Buhari who hails from Kastina State in the North West and his main challenger, Alhaji Abubarkar, from Adamawa in the North East geo-political zone.

Interestingly, the two front runners and political heavy weights are Nigerians of northern extraction. This has placed the region’s power mafia in a dilemma on who to back for the race. But many have decided while others are still undecided.

Observers are, however, of the view that Buhari who garnered the highest votes in the north to defeat former President Goodluck Jonathan in 2015 polls, would win majority votes in his northern stronghold again, especially in the north West zone, as North Central and North East could be highly competitive.

Some Northern groups, had in March this year passed a vote of no confidence on President Muhammadu Buhari and other northern leaders as they alleged they failed the region.

The groups comprising of the Northern Elders’ Forum and 16 others, who passed the resolution at the end of their meeting at Arewa House, Kaduna, claimed that politicians of northern extraction had failed the region in the areas of security and the economy.

Signatories to the communiqué included Prof. Ango Abdullahi, chairman, Arewa Consultative Forum (ACF) and convener, Northern Elders Forum had said: “No northern politician should expect to be voted for in the next general elections unless they demonstrate a willingness to champion a massive assault on poverty and underdevelopment in the North.

“In this regard, most political office holders from the North are hereby served notice that they have failed the test to lead the region towards economic recovery and growth.”

Before the commencement of the groups’ meeting then, the convener, Ango Abdullahi, in his remarks, had said the North was in search of credible leaders ahead of the 2019 elections.

ACF dissociates self from no confidence on PMB communique

However, the Arewa Consultative Forum swiftly distanced itself from a communiqué passing a vote of no confidence on President Muhammadu Buhari and other Northern politicians.

National Publicity Secretary of the ACF, Muhammad Biu, in a statement, had said the northern body was yet to decide on the president, noting that at the appropriate time, the North would inform Nigerians.

ACF had said: “The attention of Arewa Consultative Forum has been drawn to the communiqué of the Northern Groups Summit held at the Arewa House, Kaduna, on Saturday 24 March, 2018, where the ACF was said to be a signatory to the communiqué.

“For the avoidance of doubt, the ACF hereby states that it was neither involved in the preparation, nor participated in the said summit and did not mandate any of its members to represent the Forum.

“ACF acknowledges the right of individuals or groups to freedom of association as enshrined in our constitution. Any member who claimed to have represented ACF or signed on behalf of the Forum did so on his own.

“Furthermore, the views expressed in the said communiqué were those of the conveners and not those of ACF, which is an umbrella body for all northerners, irrespective of their political, ethnic and religious persuasions.

“ACF therefore dissociates itself from the communiqué in its entirety”.

Meanwhile, last weekend, some northern elders led by Prof. Ango Abdullahi, declared that they would not support President Muhammadu Buhari’s re-election next year, though they did not announce their preferred candidate.

Abdullahi said: “Two of the conditions we gave Buhari upon his assumption of office were that he should take concrete steps to address the abject poverty and underdevelopment in the North and he has woefully failed to marginally address any of them.

“Assuming that things are working in the North or in Nigeria as a whole, we would have taken a different position but everyone can see that things are not working under this government.”

Prof. Abdullahi’s camp of the Northern Elders’ Forum will back the only other major candidate in the 2019 presidential election, Alhaji Atiku of the PDP.

However, three prominent members of the NEF have quickly distanced themselves from Abdullahi’s position, declaring that they stand by Buhari and will work for his re-election.

Among the pro-Buhari’s NEF chieftains are Maj. Gen. Paul Tarfa, (rtd) Capt. Basir Sodangi and Sani Daura, who opposed Prof.Abdullahi’s stand in a statement, saying Buhari should be re-elected due to his transformational effort “because of his excellent performance and the fact that replacing him would turn the hand of development backward.”

They argued that there was no time NEF decided to reject Buhari: “No one can deny the reality that the country was reaching a breaking point. With a committed leadership and sincerity, President Buhari has achieved immeasurable success in all fronts during the last three years.

“We sincerely believe that the Buhari-led administration is doing well and should be re-elected to consolidate on the foundation of progress which has been laid by it. President Buhari is on record as the leader who has taken the fight to the criminals.

“For the fight to continue to victory, President Buhari should be encouraged by all well-meaning Nigerians to stamp out the monster of corruption.

“In view of the foregoing, the members of the NEF reiterate our solid support for the leadership of President Muhammadu Buhari in the interest of peaceful co-existence, honest leadership, progress and continuity, come 2019 and beyond”.

On its part, Arewa Consultative Forum, the apex socio-cultural organisation of Northern Nigeria, said the forum has nothing to do with the stand of Northern Elders Forum (NEF) against President Buhari’s re-election.

The ACF Secretary General, Anthony Sani, told LEADERSHIP that the forum was not part of Northern Elders’ Forum, adding that Prof. Abdullahi could not speak on behalf of Northern Region against Buhari.

He added that even some members of the Northern Elders Forum did not share the position made by Abdullahi.

Sani said: “We have nothing to do with Northern Elders Forum because of factions. Which faction are we going to talk about? They are divided and we are not part of northern elders’ forum. The Arewa Consultative Forum, had disassociated itself from the statement credited to the Northern Elders Forum when they passed vote of no confidence on President Muhammadu Buhari and other northern leaders some months back. Even now kicking against the re-election of President Muhammadu Buhari and its position, that the administration has failed, we still distance ourselves from their activities. It’s Nigerians, that will decide whether a president has failed or succeeded.

“We are not a partisan organisation. It is not a consensus of our people instead a partisan position. It is God, that used the masses/citizens of the country in making Buhari a President and they are not in position to decide for the citizens.

As things stand, only time will tell which camp blinks first in 2019, as political re-alignment will continue ahead of next year’s polls.