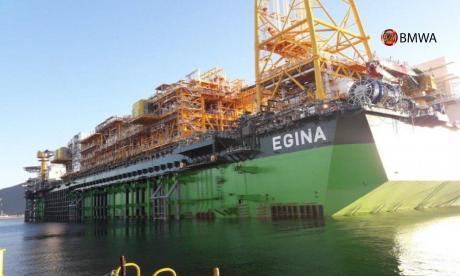 At last, the dispute between Total Upstream Nigeria Limited (TUPNI) and Samsung Heavy Industries (SHIN) over the multi-billion dollar 200,000 barrels of crude oil per day-capacity Egina Deepwater oilfield project has been resolved out-of-court.

The two companies had been flexing their muzzles in a legal battle over the contract for the building of the $3.3 billion Floating Production Storage Offloading (FPSO) unit constructed for the $16 billion Egina Deepwater oilfield being developed by Total, a global oil giant.

“Given that parties have resolved the dispute after reaching a final settlement agreement as in our letter ref. EGN-00-AEMG-BNPC-LET-000827, dated August 28, 2018; the order becomes ineffectual since there is no longer a dispute for which arbitration is required,” Guy said in the letter.

He further said: “We refer to our letter ref. EGN-00-AEMG-BNPC-LET-000826, dated August 20, 2018 wherein we informed you that the Federal High Court (the Court) adjourned the legal action instituted by Samsung Heavy Industries Nigeria Limited (SHIN) with regards to the Egina FPSO contract to 29 August, 2018 for ruling.

“On the said date, the matter came up at the Court for judgement. Although, SHIN filed an application to discontinue the matter, the Court declined considering the application and proceeded to deliver its judgement. The Court gave judgement in favour of TUPNI and dismissed all but one of SHIN’s reliefs (the relief requesting for an order directing the parties from undermining the powers of the Arbitration Tribunal).

Guy explained that the Court amended the said order to the effect that SHIN must issue its Request for Arbitration (RFA) within five working days, and that if the RFA had not been submitted to the International Chamber of Commerce after the stated period, in accordance with the contract, that order shall be automatically vacated.

However, Total, through the letter, requested “NAPIMS’s intervention once again, with the management of LADOL/GRMFZC to avert any impact to the Egina Project and by extension, the overall oil production of the Federal Republic of Nigeria”.