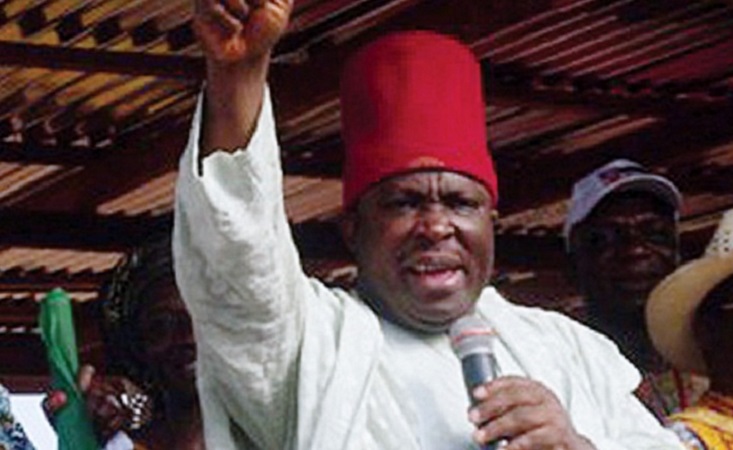 The Senator representing Anambra central in the National Assembly, Senator Victor Umeh has accused candidates of the Peoples Democratic Party, PDP, and the All Progressives Congress, APC, of merely playing politics with their promise of restructuring Nigeria.

Umeh said the duo of President Muhammadu Buhari and Alhaji Atiku Abubakar were using restructuring to garner the support of the people, but have not shown strong commitment to restructuring the country.

Umeh said the national conference of 2014 brought together the best brains in the country from all walks of life, with 492 delegates, which is presently bigger that the size of the country’s parliament.

The Senator, who was speaking to DAILY POST in an interview in his hometown, Aguluzoigbo in Anaocha local government area of Anambra State said any political party that does not commit to restructuring in specific terms does not wish the country well.

“That national conference had far reaching decisions that can help this country. It also had the beat brains in the country from all walks of life.

“Restructuring Nigeria would make the economy of the states to rebound because people will return to their original source of wealth as the zones will become competitive, and not the monthly rush to Abuja for allocation.

“Both APC and PDP have not made firm commitment to restructuring Nigeria, and any party that does not see restructuring as the cynosure of all eyes does not wish Nigeria well.”

He said that while APC has made what he described as epileptic promise by selecting parts of the restructuring document agreeable to them, the PDP candidate merely mouthed it, but refused to state in specific terms how it hopes to do it, and which part of the documents it hopes to put to work.

“PDP said it would restructure, but what the candidate failed to note was that restructuring has components, so he should tell us which of the components it is amenable to.

“For now, only APGA (All Progressives Grand Alliance) candidate, Gen John Gbor has truly committed to restructuring Nigeria. Nigerians should not be fooled, they should ask questions because only restructuring can truly bring peace and put away hate, mutual suspicion and others in Nigeria,” he said.