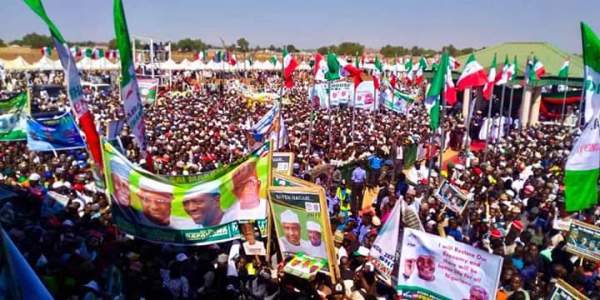 Nigeria’s main opposition party, the Peoples Democratic Party (PDP) presidential candidate, Atiku Abubakar, on Monday, flagged off his campaign in Sokoto appealing that the residents vote in one of their own as president.

He also told the crowd at the rally ground that he is a ‘Jack of all trades,’ who has the experience to revive the nation’s economy.

Mr Abubakar stated this while flagging off the North-west presidential campaign rally at the race course field in Sokoto.

“I’m a Jack of all trades. I did almost all the businesses in this world. I’m a farmer, a businessman and a civil servant,” he said. “I did everything in search of wealth, for this reason, among the presidential candidates, no one can help the youth better than myself.”

He also subtly whipped up tribal sentiments when he told the gathering that he is a full-fledged Fulani man who deserves their support.

“My great grand parents are from Wurno, Sokoto state. I can prove myself by speaking Fulfulde to you now,” Mr Abubakar said. “I am Atiku Abubakar, your brother, a Fulani man. I present to you myself. I’m seeking to be Nigerian president, please vote for me. Don’t trust anybody to come and deceive you,” he added in Fulfude.

He then explained that the 2019 election is going to be about fighting poverty, hunger, unemployment and disunity among Nigerians.

Mr Abubakar, who said he came from a poor background said: “Today I’m a somebody and I assure you, you too can be whatever you want to be if you’re determined”.

He also took a swipe at his main opponent, President Muhammadu Buhari.

“Don’t let those whose cows for years are only 150 to come and lie to you. My cows are more than thousands,” he said. “Be mindful of those deceivers, liars and cheats, there’s nothing Nigeria needs more than to make sure that the youth and the poor are empowered,” he added.

The national chairman of the PDP, Uche Secondus, at the rally warned the Independent National Electoral Commission to ensure free and fair elections.

He said the crowd at the rally was a “clear indication that PDP is winning the general election”.

Also at the event, Mr Secondus presented the party flags to Mr Abubakar and governorship candidates in the North-west.