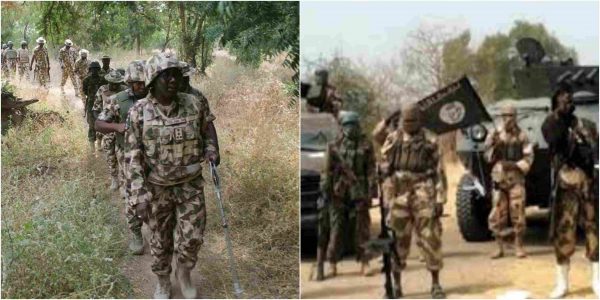 The Nigerian Army has reacted to series of Boko Haram attacks on its troops deployed in the North East.

It confirmed that the sect has been using drones and foreign fighters.

Brigadier General, Sani Usman, spoke to the press on behalf of the Chief of Army Staff, Lt Gen Tukur Buratai on Wednesday.

He noted that soldiers at Kukawa, Ngoshe, Kareto, Gajiram came under fire at different times within a 2 week period from 2 – 17th November 2018.

Noting that each of the incidents were successfully repelled and several terrorists killed, he said 16 personnel were killed while 12 soldiers were wounded.

On the Metele attack, Usman said the troops were forced to withdraw and that several casualties were recorded.

He added: “As at date, 23 personnel were killed in action and 31 personnel were wounded in action and have been evacuated to several medical hospitals within Borno State. The Nigerian Army commiserates with the MNJTF at this difficult time and wishes to state that all necessary support will be rendered to the MNJTF to reverse this resurgence of the Boko Haram Terrorists.

“The Nigerian Army wishes to further commiserate with the families of the gallant officers and soldiers that paid the supreme price in the course of defending their fatherland. The sacrifices of these fallen heroes will not be in vain. We also wish all those wounded in action speedy recovery and assure them of our continued support and care.

“The incident of 18th November 2018, happened at a time when the Nigerian Army was planning to hold the Chief of Army Staff Annual Conference for 2018 in Benin City, Edo State. On account of this incident, the Conference had to be moved from Benin City to Maiduguri to enable the Nigerian Army leadership get closer to the troops on the ground and to better appraise our activities, assess our performance and identify our shortcomings as an Army.

“Since 2015, the Nigerian Army in conjunction with sister services and other security agencies have systematically degraded the capabilities and capacity of Boko Haram terrorists and many successes were achieved. However, in the last 2 – 3 months, we have noticed daring moves by the terrorists, increased use of drones against our defensive positions and infusion of foreign fighters in their ranks. These potent threats require us to continually review our operations.

“At this point permit me to implore all of us to spare a thought for the brave men and women of the Nigerian Army who paid the supreme price for the security of Nigeria. The Nigerian Army will continue to support the families of these brave officers and soldiers and pray that their souls rest in perfect peace. Let us also not forget the men, women and children who have been killed or affected by the atrocities of the terrorists. It is for their sake that this war against terror must be won.”