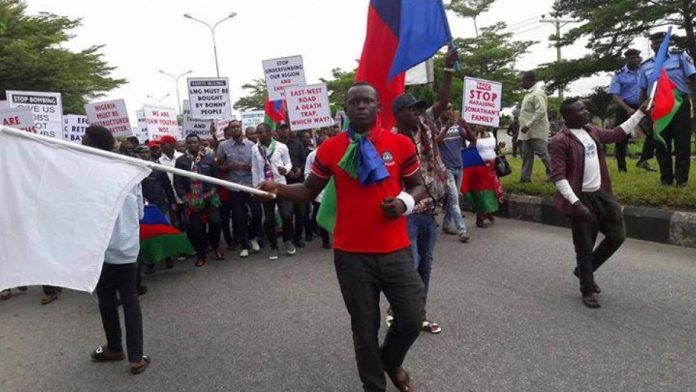 A Niger Delta group known as the Movement For Survival Of Ijaw Ethnic Nationality In Niger Delta (MOSIEND) has raised alarm over the rising threats to the life of the Chairman of the Presidential Amnesty Committee, Professor Charlse Dokubo over alleged contracts and jobs meant for youths of the region

The group warned the accused Ijaw leaders to stop the alleged series of threats issued to the Amnesty Boss or faced the consequent anger from the youths of the region.

The group, MOSEIEND, in a statement issued by the National Secretary, Amb. Winston Amain, in his alarm on the alleged threat to the Niger Delta boss, accused some Ijaw leaders and former Militant leaders of alleged diversion of jobs and empowerment schemes initiated to empower youths from the region by the Presidential Amnesty office and the Niger Delta Development Commission (NDDC).

According to MOSEIEND, though preliminary investigations by the group showed that these identified Ijaw leaders and Former militants have resorted to blackmail and threat against the Amnesty Boss, Prof. Charlse Dokubo, these self acclaimed Ijaw leaders employed alleged deceptive means in securing amnesty jobs, NDDC Jobs from federal ministries which is meant to engage and reposition youths positively in the Niger Delta region.

MOSIEND, noted that the hijack of amnesty jobs were carried out by some deceptive and self acclaimed Ijaw leaders, “we have been informed that these self acclaimed Ijaw leaders employ deceptive means in securing amnesty jobs, NDDC Jobs etc from federal ministries which is meant to engage and reposition youths positively in the Niger Delta region.”

“Unfortunately, the hijacked amnesty jobs that has been awarded to these self acclaimed ijaw leaders forced youths to morphed into crimes such as phone snatching, robbery, cultism and just to mention a few.”

The Movement For The Survival of Ijaw Ethnic Nationality in Niger Delta (MOSIEND) however warned that it will no longer condone the criminal acts of deception by these leaders”” these incessant upsurge in the deceptive way Ijaw leaders employ in getting amnesty jobs from federal ministries and when denied those jobs, they resort into threatening the Amnesty Coordinator.”

“MOSIEND as the largest youth mobilization Organization is fully abreast with all these deceptive happenings and has urged the Amnesty Coordinator, Mr. Charles Dokubo to be steadfast and not to be swayed by their antics. More so, the Organization and well meaning Niger Delta youths are solidly behind him.”

“MOSIEND through it’s National Secretary, Amb. Winston Amain, ishall mobilize our youths to take their Pound of flesh from this so call leaders that has mortgage their conscience to the devil.”.