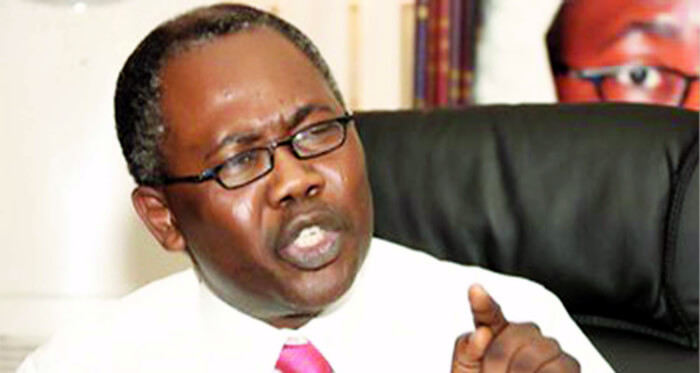 Former Attorney-General and Minister of Justice Mohammed Bello Adoke (SAN) has said he never at any time discouraged ex-President Goodluck Jonathan from conceding victory to President Muhammdu Buhari in 2015.

Jonathan while speaking at the launch of his book “My Transition Hours”, which was presented in Abuja on his 61st birthday said he turned down the advice by the then Minister of Finance and Coordinating Minister for the Economy, Dr. Ngozi Okonjo-Iweala; Attorney-General of the Federation and Justice Minister Mohammed Bello Adoke; Aviation Minister Osita Chidoka, who was a compere at the book launch; and his Senior Special Assistant on Domestic Affairs, Warpamowei Dudafa not to concede defeat to President Buhari in 2015.

But, Adoke reacting, said he, the ex-Minister of Finance, Mrs. Ngozi Okonjo-Iweala, the ex-Minister of Aviation, Mr. Osita Chidoka and the former Special Assistant on Domestic Affairs to the ex-President, Waripamo Owei-Dudafa, actually prevailed on Jonathan to accept defeat.

He said having been at the vanguard of protecting Nigeria’s democracy as an Attorney-General of the Federation, he could not have stooped low to ask Jonathan to reject the outcome of the 2015 presidential election.

But Adoke noted that some hawks in the administration actually wanted Jonathan to refuse to accept the results but he, the two ex-Ministers and Dudafa encouraged Jonathan to make the concession call to President Muhammadu Buhari.

He said: ”As a patriot, I could not have advised him not to concede defeat. Ngozi Okonjo-Iweala, Osita Chidoka, I and Waripamowei-Dudafa are the real heroes of that historic concession as we ensured that despite pressures from the hawks within the administration, the President conceded defeat by calling President Buhari as at the time he did.

“We are not saboteurs, we are patriots. We actually asked Jonathan to concede. I have impeccable democratic credentials; no one can spoil my records.

“I expect that Jonathan will clear the air on the issue as he knows the truth. However, my forthcoming book will address the issue most comprehensively.”