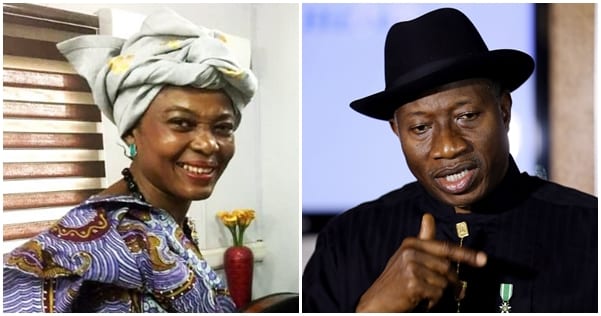 Zainab Duke-Abiola, wife of late Moshood Abiola, has said the new book written by ex-president Goodluck Jonathan is a “monumental manipulation of historical facts and figures”.

Jonathan on Tuesday, launched his book ‘My Transition Hours’, to mark his 61st birthday.

In a statement on Thursday, Duke-Abiola described the book as “a pseudologia fantastica”.

She said the claim by Jonathan that former US President Barack Obama and ex-UK Prime Minister David Cameron interfered with the country’s 2015 election is “ludicrous”.

“The book is a monumental manipulation of historical facts and figures.

“Though President Jonathan conceded defeat to President Muhammadu Buhari after he lost the elections, he remained fixated on the presidency and did not want to believe that Nigerian voters swept him out of power because of his gross incompetence and ineptitude.

“For the records, Jonathan lost the election because he made himself the sole candidate of the PDP despite his abysmal failure in governance. He directed the party to print only one presidential nomination Form 001, which I paid for, but because of his blind ambition, he confiscated my presidential nomination Form 001 and went into the political battlefield in borrowed robes, thereby meeting his political Waterloo accordingly,” Duke-Abiola said.

She said the ex-president plunged the country into an avoidable security and humanitarian crisis.

“I think the only option left for Jonathan is to plead with God and Nigerians for forgiveness and until we forgive him, he should remain in his purgatory of lethargy. No amount of write-up can erase the fact that he took this great nation for granted.

“The indeprecabilis question for Jonathan to answer is What did he do with the power Nigerians entrusted him with? Did he ameliorate the sufferings of Nigerians or even the marginalized Niger Deltans? Did he even put drinking water in his own village? Are Jonathan’s village mansions accessible by road? Why does he charter helicopters to travel to his own village?

“Jonathan said corruption is not stealing and thereafter flagged off the looting spree of the treasury, which ultimately plunged Nigeria into recession when he left. Jonathan will go down in history as Nigeria’s worst political mistake,” Duke-Abiola added.