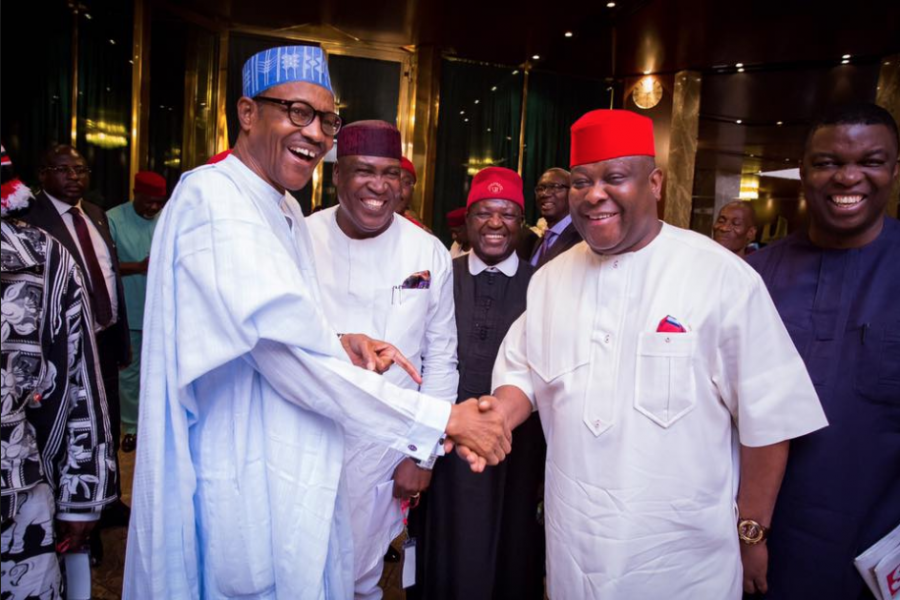 The Peoples Democratic Party, PDP has reacted to the meeting between President Muhammadu Buhari and Governors from the South East.

President Buhari met with Governors and some political leaders from the region in closed-door at the Presidential Villa, Abuja yesterday, promising to complete all infrastructural promises he made to the region.

But in a statement yesterday, the party said that, “Nigerians are no longer interested in fake promises and false performance claims, now that elections are around the corner.”

The statement was signed and issued by Kola Ologbondiyan, its National Publicity Secretary, in Abuja.

The statement said that attempt by Buhari to lure the South-East geopolitical zones into supporting his second term “fell like a pack of cards as the people have resolved not to follow any leader who cannot deliver on his promises.”

It added, “Instead of accepting his failure, which is manifest to all, President Buhari, who is reputed for not fulfilling campaign promises, is busy making a fresh list of fake promises to Nigerians.

“In this desperation, Mr President fails to understand that the people of the South East, just like other Nigerians, are too sophisticated to fall for gimmicks, false promises and ethnic politics, and as such cannot be swayed from their resolve to rally with Atiku Abubakar to rescue our nation from the shackles of misrule.

“Nigerians have since seen through President Buhari’s bouquet of failures and fake promises, which in any case, cannot heal the wounds of marginalization, nepotism, inequity, disregard for federal character principle and harsh economic policies, including obnoxious foreign exchange regulations and heavy taxations of his administration, which are killing businesses and plunging families into extreme poverty.

“Nigerians, including those in the South East, know that President Buhari does not keep promises. They know that he has not fulfilled any of the promises he made during the 2015 campaign. As such, they cannot fall to the same old trick ahead of the 2019 general election.

“Moreover, President Buhari is yet to apologise to the Southeast and other geopolitical zones over his administration’s indictment for human rights violations, extra-judicial killings, illegal arrests, arbitrary detention, torture and reported disappearances, as detailed in the reports by the United States Department of State, Amnesty International (AI) and Transparency International (TI).

“Instead of clutching on straws and seeking to beguile Nigerians with fake promises, blame game and false performance indices, President Buhari should come to terms with the fact that there is no way Nigerians can change their minds about voting in Atiku Abubakar as his inevitable replacement come February, 2019.”